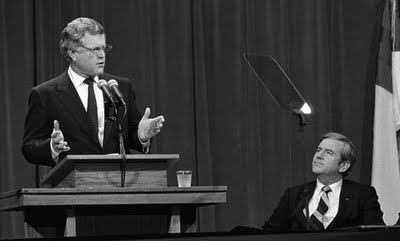 The top news story on Liberty University's website since Senator Ted Kennedy's death three days ago has been the relationship between the late Dr. Falwell and Senator Kennedy. At first, I was skeptical. I mean honestly...what in the world could Kennedy and Falwell have had in common? Surely it was some sort of spin put on the recent passing of the senator by the university.

It's a good thing that I've been wrong before and know how to handle it. Turns out, Ted Kennedy and Jerry Falwell had been friend for decades, carefully respecting each other despite the fact that they disagreed on what I assume must have been just about everything. You can read that article here.

At first I was a little troubled about the respect Jerry Falwell had for Senator Kennedy. In fact, I went so far in my mind as to think it was a little hypocritical of Falwell. I mean, the Senator stood against just about everything that ultra-conservatives like Falwell hold dear.

But on second thought, I think this is brilliant, and I want to propose that I need to be more like these two men. I am lousy when it comes to respecting my opponents. This isn't just about the Taliban, the Iranian Navy, or the North Korean Air Force (my military opponents). I don't respect the atheists on board, the Catholics on board, and I don't even respect some of the Christians on board.

There, I said it, I'm lousy at respecting others. I have already said that compassion isn't a strong point for me. But what I have also said is that this fact needs to change. What I found great about Jerry Falwell and Senator Kennedy is that they can help light the way for opponents on the spiritual level to respect each other.

Can I respect an atheist? Yes. A Catholic/Mormon/Shintoist? Yes. Why? For no other reason than the fact that they are created in God's image and they may someday come to believe in Him. Why would I want to be the guy who shames my Father by my actions? Oh, this has to change in my heart!

If you have a problem with this as well, then join me as I try to emulate the example of a liberal senator and the founder of a major conservative Christian university. This has to change with us, and we can start now!

Thanks for linking the Liberty article.

I don't think that it is respecting someone because someday you hope they will come to believe as you do. It may be a step in the right direction, but it is not really respect because you don't respect someone for who they are if you are wishing to them to change.

I may not agree with you on your beliefs, but I respect you as a human being for who you are and what you offer to the world, not because I am hoping that someday you will realize that Buddhism (which is the religion I believe in) is the correct religion. The spiritual path I have chosen is right for me, as you believe Christianity is the right one for you.

It will be respect once you can accept that someone has something valuable to offer for who they are now, and not as you would like them to be.

Thank you for your comments. I hope that you've subscribed to them so that I can get your feedback on this.

The fact is that I hope all people will come to Christ. I can't deny that any more than I can deny that I'm a man, or that I'm American. It's just a fact. I believe that I get that from my heavenly Father (II Peter 3:9).

I know that you don't believe the same way I do, and I respect that (I'm trying to apply the principles I'm writing about). I've read over your blog, and I liked what I read, but in the end, my desire is that I would see everyone in heaven.

The definition of respect has nothing to do with accepting...but rather it deals with esteem. In my faith, I esteem you (and will in the future) because you are made in God's image.

Dan, I appreciate the fact that you want my feedback - a rarity in my experience. I, too, am interested in your feedback.

I don't ask you to deny who you are, but while respect deals with esteem, it has to do with esteem in the sense of the worth of the person that you are talking about. I do happen to believe in reincarnation (although to really get into that would require more space than this comment), but it would be similar to me saying that I respect you because of the lives you have lived and will live as you progress as a soul.

In my mind - and feel free to disagree with this - that would actually be disrespectful to you because it disregards the beliefs you hold. It ignores a fundamental truth about you as a person in favor of what I would prefer you to be. I am not holding you in esteem because of your own worth, but in how you conform to my vision of what you should be. To me, that is the same as you esteeming me because I am made in your god's image. You might as well say you respect me because I resemble a unicorn or a pile of dragon dung. They are all fictions to me. But I accept that they have meaning to you.

My respect for you comes not from what I hope for you, but for you yourself and what you have to offer the world. I esteem you for your intrinsic self-worth, not what I hope happens to you when you die.

I had a similar discussion with someone over the issue of homosexuals. They insisted that they could be supportive of students at our school who are homosexual (since you read my blog, you know I'm a teacher), but that they still felt that there was something wrong with them. In my opinion, you cannot be truly supportive of and accepting of someone if you feel that who they are is wrong. If you cannot see a person for who they are instead of who you wish they were, then I don't think you can totally support, accept, esteem, or respect them.

I don't expect to change your mind - my own mother and I can't see eye-to-eye on religion these days - but I do like dialogue. I recognize my own prejudices, and I know the only way to overcome them is through open dialogue.

Jimmy, as a side note, would you be willing to guest post an article on reincarnation for my blog? Let me know if that's something you'd consider.

Now, back to the discussion at hand. You bring up some excellent points here, and I will do my best do apply what I believe to be truth to them.

I don't know if it's disrespectful for you to think of the lives I may or may not have lived before as not being worthwhile. After all, I'm not too concerned about being wrong. Since I think I believe in what could be the worst possible punishment for disbelief (hell), having to start over in another life shouldn't be too bad (this is why I need your post on reincarnation). Let my next self figure it out. In my very, very limited knowledge of Buddhism, it seems like this is a logical and acceptable conclusion. So, if you are respecting me for this reason, then that doesn't seem too bad to me.

However, I can actually see how my beliefs could be offensive (I Corinthians 1:23). I have to accept that as a chance I have to take to rescue you (bear with me) from what I think is an eternal punishment in hell. It's nothing against you...in fact, honestly I'd be a lousy person if I didn't warn you, I should think.

Now, what I think you get into in your latest comment is acceptance, which is more than fine. I accept people as well as I can, and if that's what is equated to respect, then I suppose I agree with you. Accepting a person where he/she is currently (beliefs, lifestyle, etc) is something that Christ taught us. He met many individuals in the midst of sin (by Christian standards) and accepted them...but did not leave them there. I can discuss that more later, but not here. The fact is that homosexuality is no different in God's eyes than adultery or fornication, so to commit one or the other is the same. I know that was just an example, so I'll stop there. The simple fact is that I can respect a homosexual, or an adulterer, or a thief, but I don't have to necessarily respect that action. I respect them for the fact that God created them (as per my faith). And yes, I have a hope that they will come to the faith.

So in the end, I see your point about needing to accept a person. Actually, I would agree with you. It sucks to be isolated. Believe it or not even Christians go through this. But to respect a person for a belief that I think would send them to hell might be more than I can do.

As another side note, my only Buddhism experience is from my time in Japan, which is a hybrid-Buddhism at best, so I have no doubt that I have messed up some of the belief, and I truly do apologize for that.

And granted, I have no idea why Kennedy and Falwell respected each other, which was the point of the original post. It shows me that I need to respect more as well.

I don't intend to sound sharp, but if I do, know that I'm coming to you in gentleness as Christ would.

While Christ never respected a religious disagreement between Himself and another person, He loved that person. So, if we mean 'love' by 'respect' and 'esteem,' which I'm certain, then we agree.

Religious disagreement with Christ puts one at emnity with Christ, as it did the Pharisees and Saducces. So, it's far from Him to accept that relationship because it leaves a person severed from Him. Christ would rather we believe and He gather us to Him (Luke 13:34).

It's true that if we esteem someone, then we find value in that person. It's also true that Satan finds value in mankind, however only in his rebellion. And the whole world too may find value in anyone.

But, a Christian parts from 'esteem' in the sense of respect of what one has to offer, and instead esteems one in that "God so loved the world that He gave His only begotten Son, that whoever believes in Him should not perish but have everlasting life" (John 3:16).

And Christ even died for every single one of us "while we were still sinners" (Romans 5:8). So, we love not because you or I have anything to offer, but because Christ offered Himself on a cross for us.

Christ valued us to the point of death, so we can only love God and our neighbors the same (Matthew 12:30-32).