We Planted a Church! 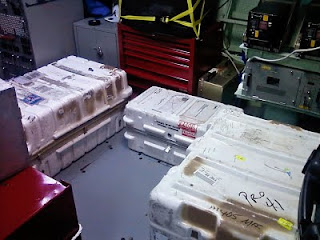 Quite by accident, I assure you.


About two months into my recent deployment, after confirming a man’s salvation and suggesting that he read the book of John, it hit me that I should do it with him. We met to go over chapter one a week or so later and it went very well. I asked him if we could invite some others, and that’s really where the church started…just two guys meeting over the book of John.

At any given “service” we would have three to five guys reading portions of scripture and sharing thoughts. The picture to the left show the very informal location where our meetings took place. It was very casual, but very instructional. Everyone had a say. I “led” only in the sense of one who facilitates. We got through the first ten chapters of John before the deployment ended. We have proceeded through another chapter on a duty day after the ship returned to San Diego.

So is that a real church? It depends on who you ask. The US Government, for example, would have a good chuckle, but we don’t take an offering so that doesn’t count. I think a few of the writers/missionaries I subscribe to might think this was a church, such as Guy Muse, Roger Thoman, etc. We are a body of believers, we have witnessed to those around us, and we meet together for furthering the Kingdom and our walks with Christ.

On the other side of the coin, this church will fold at some point. We will all transfer and even if we pass on this little congregation to someone else, it will be totally different by then; a new church, if you will. This is a church that exists to learn about Christ and living in him. And when the Holy Ghost is done with this little gathering, we’ll all move on. I’m just grateful to be a part of it right now!

And furthermore, this isn't the only church we go to. Even on deployment, some of us would invariably go to a church in whatever port we visited and our chaplain had services that were fairly well-attended as well. Now back in San Diego, I have encouraged all of the men to find a church home, even though we still gather for fellowship.

So maybe it's not a church, or maybe it is. But for a few crucial months, we did what we had to do to get by. God called us together and gave me a purpose in the process. I don't care if this all goes away tomorrow or if it lasts for decades to come. It was and still is an adventure of the highest sort...a battle for the souls of men.


Recent Events from the Church on Antietam:

26 July: I was privileged to baptize a sailor in the Pacific Ocean!
02 Aug: While some of us were on duty together, we got together for John chapter 11.
09 Aug: Welcome Back to Work Celebration and Fellowship at our house.

Passion has a lot to do with it. Skill is also important. You could try to convert everyone and start a chuch by intent, but it's much more fun to let it happen this way.
Great post.

I'm glad you agree with me about this issue. It's hard because I know I could have done more, but what happened was great, and I am not able to claim any of it. If I had done more, maybe trying harder to get guys to come, then I would have though that I was the evangelist, not the Holy Ghost, and that would have been a shame.

This is great stuff.

Man, this is one of the coolest articles I have read in a while. I am praying God blesses this church.

Don,
Thanks so much for your encouragement! I am hoping to meet again this Sunday with at least a portion of the guys while on duty.
Sure appreciate the thoughts!