Last night I was invited by one of my guys to go to church. It was more of a request for a ride to church, but it served God's purpose for my life in a few ways. My friend, whom I had baptized several weeks ago, had started going to to The Rock Church in San Diego. I've lived in San Diego for almost four years (this time around), and I've yet to go to this church. I have an aversion to this big churches, and let me tell you...it's all pride! Every bit of it! I won't go into the specifics, but just know that I struggle here. And because of that, I have avoided going to big churches like The Rock Church.

So when one of my good friend from the ship, whom I had spent numerous hours with on deployment, asked me to go with him, I said yes. At some point, a man has to just get past his fears/arrogance and get on with it. So I decided to be the man last night.

The Rock Church is amazing. This isn't a review of any kind, but let me just say it was amazing. Here are some pictures of what it looks like: 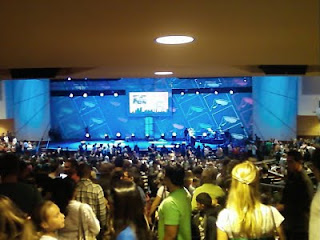 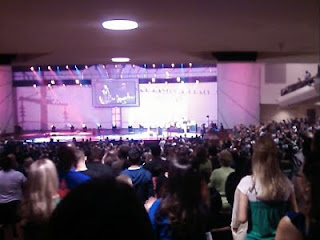 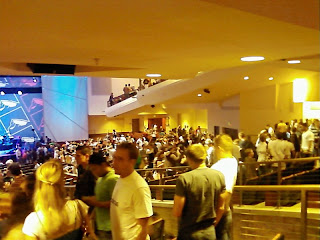 Yes, it was just plain massive, but you know what? I didn't feel out of place like I thought I would. I didn't feel crowded or anonymous, although I probably could have if I had wanted. I feel like the gospel was preached and I was very, very impressed with the fact that the speaker held an alter call at the end of the service. I wouldn't have thought that possible at such a large church.

Yet that wasn't the point of me going. Yes, I wanted to see what The Rock Church was all about, but I could have done that on any weekend. The real reason I went was to support one of my guys. One of my fellow warriors on the USS Antietam needed a way to get to church, and while I won't be leaving my family on a regular occasion, Alicia and I felt it was ok for this time. I called another guy and he was also going that night, so we all sat together.

It reminds me of our times in Kagoshima, Hong Kong, and many other places overseas. The difference this time is that I was the one being invited. It was so awesome. My buddies have come so far so fast! Now I'm the one who is being invited to take part in something, and that, my friends, is the best blessing of them all.

So it did my heart a lot of good to be in this situation. First, I got to see an amazing church that I would have continued to put off because of my pride and fears. Secondly, and most importantly, I got to see guys I had been mentoring on deployment in their element, where they were the ones who knew what was going on, and where they were in charge. It did me, and I think my friends, a lot of good.

My wife and I went to a church like this one near our hometown at one time. At first it was great, but over time I began to realize I was bitter and had a chip on my shoulder each time we went. After roughly 4 years, there were still the same greeters that would come up to us and tell us welcome....and then ask us if it was our first visit. I did not know these people's names, but I did know their faces, and had actually talked to them on occasion. I guess it just really started to get to me when I realized that these people had no clue who I was after almost 4 years! I mean, they did not even remember that I had shook their hand last Wednesday or Sunday. We ended up leaving that church after several experiences like that (I wrote about it on my blog). We just realized that we were outsiders to a bunch of clicks that were happening there, we realized that they would never know our names. The preaching was great, but the attitudes and the compartmentalization of several small groups that appeared to be better than everyone else just turned us off. We did not feel that this was the way it was supposed to be. I think that alot of Mega churches face this reality. They become SO big that they lose touch with the people that actually go to the church. Anyway, guess I am rambling here. Enjoyed reading the article brother!