On Eating and Being a Missionary

I was so blessed on this last deployment. God not only gave me a four day stop in Kagoshima, a city in my second home country of Japan, but he allowed me the wonderful opportunity to meet with Dale Viljoen (pronounced Filyun). I first met Dale in Sapporo, on the northern island of Hokkaido, in the winter of 1999. Since then, we've had a great friendship through email and blogging. 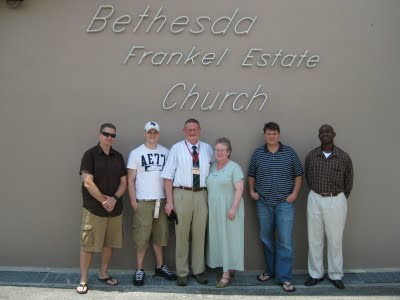 In Singapore, I listened to Dale (third from the left) speak at a church and then we went out for lunch. During lunch, I balked at eating one of the things offered to me. In my defense, I had eaten many of the things, but some I didn't.

Dale looked across the table at me, in front of my friends and his associates, and said, "Dan, you won't be a good missionary unless you can eat the local food."

I was stunned, to be honest. Thankfully, I played it off ok, but the fact was I got hurt and humbled that day. I don't know if it's how Peter felt when Paul confronted him, but I felt like an idiot. I shoulnd't say it quite like that, because the fact is I recovered quickly, took the lesson learned, and Dale and I parted like the friends we were. It was actually later that I really got humbled.

I'm so grateful to Dale for pointed out my shortcomings. He was a true friend to me that day. And he was right...I won't make a good missionary if I can't handle the local food. I've always struggled with that facet of my ministry and I've always hid behind the "I'm a meat and potatoes kind of guy" excuse...which is really lame.

Tonight, while doing some homework for my seminary class, I read this: "An emptied pan of caterpillars is more convincing that all the empty metaphors of love which missionaries are prone to expend on the heathen." This is a quote out of Readings in Missionary Anthropology II, republished in Perspectives, A Reader. The article was written by William D. Rayburn, a former translation consultant in Africa, among other places. He had told a man once that missionaries should eat the local food, and the man put him to a test with a pan of seared caterpillars.

I've balked before and felt ashamed. On one of my trips to Thailand I picked at my food until everyone else was finished before I threw it away. In Japan, the church I was visiting had to feed me something different because I didn't eat the tofu the rest of the fellowship ate. The list goes on and on, but I don't feel like embarrassing myself further.

Dale was a special friend to me that day in Singapore, and three months later I need another person to ground it home for me because I still can't get it. I would love to be a missionary to Japan some day, but how can I? Not until this, and some other issues, are fixed.

Do you have any stories you feel comfortable sharing? Do you have any advice about getting over fears of food overseas? If you're a missionary, how did you do it?