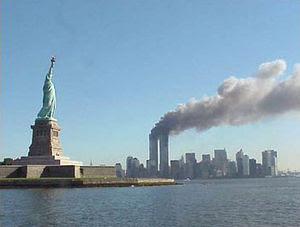 The berthing cleaners were talking near my rack in excited, albeit hushed, tones. Something was wrong, but in my groggy state, I didn’t know what it was. Having been up most of the night before for maintenance, I had just hoped to sleep in a little, as has been modern navy custom. With those guys talking, it would be impossible!

“Look!” shouted one, “a plane hit the World Trade Center!”

I rolled out of my rack and slumped on the floor, exhausted. Putting my flip-flops on (one dares not walk in berthing without them), I assumed a little Cessna had hit the big building. No big deal.

“Another one!” the guy shouted.

I walked over to the television in our lounge and rubbed the sleep from my eyes. “What happened?” I asked.

All I knew to do was get ready. I don’t really even know why I was getting ready, but I felt I should. Before I had even put both feet into my coveralls, I heard over the loudspeaker: “This is the TAO from Combat…All Hands! Flex Air! Flex Air!” Suddenly, I had more motivation to get ready. I was part of the response team for air defense! I raced up to the Combat Information Center (called “Combat” or “CIC on ships) and checked in. Already the FAA had grounded all aircraft and the USS Mobile Bay was tracking all aircraft still in the air over San Diego and Los Angeles. I watched the screens, still groggy from a lack of sleep, hoping that nothing would happen, yet hoping something would at the same time (a sailor’s dream, I suppose).

It didn’t take long for me to start thinking about Alicia. Once the adrenaline had slowed from a potential combat situation, I realized I had also heard that the ship was no longer sending or receiving email, which meant I couldn’t email my wife. This was just about as real as we had ever been. She was on her own. It was the first time I ever felt worried. I didn’t think San Diego was a very big target, but the radar screens still showed a lot of aircraft in the air. And what if the attackers tried something else?

The next morning we headed north, if I recall, having been relieved in the area by an aircraft carrier. Shortly thereafter we were off the coast of San Francisco, again in the air defense mode. Only by this time, the only thing in the air was combat patrols. It was eerie. I don’t know exactly how to explain it. All of the air lanes were empty…

We spent the next week or so patrolling the West Coast of the States as part of Operation Noble Eagle. Somehow in there I was able to make contact with Alicia and found out that she was ok, although worried about me. I was relieved at both of those things.

Add another week, and we pulled into Port Hueneme Navy Base (Ventura) for planned calibration of our radar systems. This had been scheduled and with things slowly dying down, the top brass decided to send us in for our maintenance. I called Alicia as soon as I could, and she tore off to come meet me.

What a reunion! What joy and relief and excitement and power in that night! I know that some “old hands” who have fought in wars would laugh at us, but I had never been separated like that before. It was amazing to have her in my arms again.

After Port Hueneme, we did some more patrolling and finally arrived back in San Diego for upkeep.

I’ve heard many times from my parents and grandparents that there are certain events where you’ll never forget where you were when it happened. I’ve heard a number of people from my dad’s generation talking about Martin Luther King’s assassination and JFK’s assassination. I’ve also heard from my grandparents about the day Pearl Harbor was attacked.

Now I have my own. I’ll always be able to tell my kids and grandkids about how I woke up on a routine patrol off the coast of San Diego to the word about 9/11 and hearing “Flex Air!”

So what about you? What is your story of that day?

Yes, our generation will always remember the day our lifes changed. I remember so many images and the feeling in my heart so well from that day. Thanks for sharing your story.

And thank you for sharing yours!

Incredible story! Thanks for sharing. I was home in Rhode Island and just happened to be watching the morning shows when it happened. It was strange not to hear planes taking off/landing for the rest of the day.

I'm so glad God holds our lives in his hands!!

Wow Stephanie! What a story you have as well! It's so good to know God has us protected. That is a great way to describe how he took care of Alicia and myself, even though we were separated and unable to communicate. Thank you very much for pointing that out!

I had just got off the graveyard shift and was going to be off for a few days. i was eating bacon and eggs before I went to be, and watching CNN. I will never forget watching the two towers and the Pentagon. The stories and speculation were running wild! I did not go to sleep until later that evening, and then only for a little while. I stayed glued to CNN for about a week watching everything unfold. Thanks for sharing your story.

Thanks for your story! We didn't have as much connection as you did that day, but we got bits and pieces as time went on.