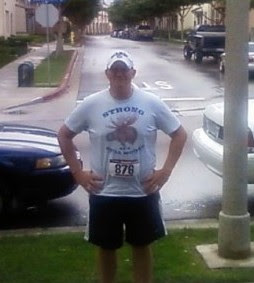 Yesterday was my first race of my new life. There is a lot to write about regarding the race, but I will try to keep the extra commentary down to a minimum. First of all, the t-shirt in the picture to your left is from the website The Art of Manliness. The shirt says, "Strong as a Bull Moose" and I love it. That statement says everything I want people to see in me as a husband, father, and (on days like yesterday) a runner. If you haven't been to The Art of Manliness, you need to check it out.

Anyway, on to the actual race report:

It was very cold (for San Diego), and rainy as you can see from the picture. I didn't dress correctly for the weather, but I ended up warming up by mile 3 or so.  I will say that I was disappointed that we started 30 minutes late. That was a big disappointment.

Here's a breakdown of my race:

Mile one: (8:24 split) I enjoyed this mile, but the race was a little disorganized, so we weren't corralled at all. I had to run past a lot of people who honestly shouldn't have been so close to the front. I say that understanding that people passed me too, so I wasn't really in the right place either. By the end of the mile, things had settled down quite a bit. Unfortunately, I ran this mile way too fast. I would end up giving all of that time back on mile four.

Mile two: (9:13) My split was much more in line with what I wanted during the race. I had settled down a lot by this time. The roads weren't nearly even. I don't mean just that there were hills, but rather that the condition of the road was less than desirable. Think washboard dirt road and you'll know what I was running on. I'm grateful, however, that I had zero ankle or knee problems. Rain started coming down during this mile, but quit again by the end of that mile.

Mile three: (9:22) Great split here as well. Slightly less than Mile two, but not bad at all. Nothing really to report. All systems were a go and I was grooving fairly well.

Mile four: (12:43) As you can see, I hit a wall here. It was an ugly hill that I didn't remember running down on mile three (we turned around at the end of mile three). Everyone around me got smacked in the face like I did, so I wasn't alone. Still, I was very, very disappointed with this mile and thought more than once during this stretch about giving up on my goal of less than 1 hour finish time.

Mile five: (9:44) Pushing through the above, I got back on track after that hill and found myself looking at a very real possibility of a 1 hour 10K. I felt some excitement coming back into my heart, and I started chanting internally (I hope!) "Under an hour! Under an hour!"

Mile six: (7:55) I still don't know where this came from. I've never run this fast on my training runs. I had wanted so bad to give 1 hour a shot that I found someone running that pace and settled in on the same pace. All I can do is be grateful that God provided this help when I needed it. I'm super excited about the split time for that mile and hope to build on it for future runs.

Finish:  (2:29) This was almost all uphill. The big finish was up the hill to Cougar Winery and I was having trouble fighting through my desire to quit at this point. I don't know where the energy came from to start running harder up the hill, but it came. I am so pleased with that very uphill run. I saw people cheering for me and it felt so good. As I crossed the finish line, I hit the stop time on my watch and heard my name being called out. "Smith, Sheldon Time: 59:53!" My total adds up to 59:50, but I'm not complaining! Hopefully, they will post the official results soon and of course I'll go with the official results.

I had two goals when getting ready for this run. My first goal was to just keep running. I didn't want to walk at all, except to get water, and only then to walk just enough to get the actual drink...then move on. My other goal was to run in under 1 hour. I'm so happy that I made both of my goals.

My pre-race weight was 240.5 pounds, which means that I've also lost about 6 pounds since starting on this journey. I'm very happy with the results all around. This is hopefully the first step in a long process to lose my weight, get faster and stronger, and meet my other goals. God is so incredibly good to me and this run is evidence of it. I can't wait to run my next one!

Congratulations on finishing under 1 hour! I thought we were going to be running in rain (which we did a little) and found myself running with my jacket draped around my neck. This made for a very uncomfortable run. I too did not care for the lack of coordination with this event. Also, all the snacks were gone once I was finished and there were no trash cans by the water buckets so you couldn't tell which stack of cups were already used. Oh, they only had medium shirts of which I paid an extra 5 bucks for. All in all it was fun and I am glad I completed one of my goals in life. I am glad to hear that so many others are on the same path to healthiness and thanks for sharing your story. Great read and thanks!

@Stephanie: My wife is so proud of me that she put it on Facebook! I'm very supported by my family. Timothy's first question after I got home was "What did you place?" That will be a long conversation once the official results come out.

@Brian: Thank you so much for your take on this. I did hear that they ran out of the larger t-shirts, and that is just poor planning somewhere along the line. I heard early on that it was only like the 2nd year or so that they've had the run, so that might explain some of the planning issues. I'm glad you had a good time and met a goal. Are you running the Resolution run in January?

I had not planned on running the Resolution but am thinking about it now. After reading more of your blog, I am very impressed that you ran this 10k with only 4 weeks of training and you finished under 1 hour. Nice job!! You have inspired me to run more and faster. I too started this journey with weight loss in mind. Running is a struggle for me but the feeling of energy and confidence is what keeps me doing it. I started at 225 and now am at 214 but this has been over a span of 4 months. Well thanks for the blog posting and I look forward to reading your half marathon experiences!

@ Don the Baptist: Thank you so much! It really has been wonderful to hear all of the well-wishers. So awesome.

@ Brian: I'm happy to have supported you in some way! Inspiration is the name of the game. You've inspired me too, because even though I ran a decent time (for me), I haven't lost a lot of weight, mostly due to my incessant eating. Anyway, keep at it and get your speed on. I use a training schedule from Marathonrookie.com. It gets into some pretty long runs of course, but I bet you could do it.

If you have a blog, let me know as I'm always interested in hearing about other people's running. Good luck!