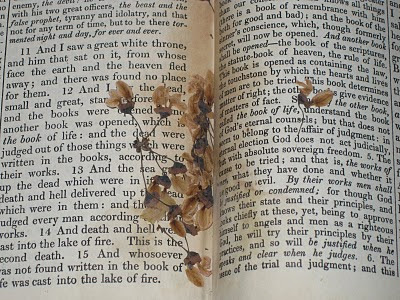 When my great-aunt Alice first heard back in 2001 or so that I had considered a call to preach, she gave me a set of Matthew Henry commentaries. They were very old and had been used considerably. Yet that gift meant so much to me. That my aunt thought I should have that commentary set meant that she thought I was on the right track and honestly, I valued anything that told me I was doing the right thing. Maybe I read a little too much into it, but only time can tell. At any rate, it meant a lot to me.

Both my great-aunt Alice and her husband Jim have passed on now to be with the Lord. I think about them from time to time and about the limited opportunities that we had together after I transferred to San Diego and got married. They loved my wife so much and thought of her as family from the get-go. Whether this blog post is worthy to be called a testament to them or not is debatable, but I want to show you something: 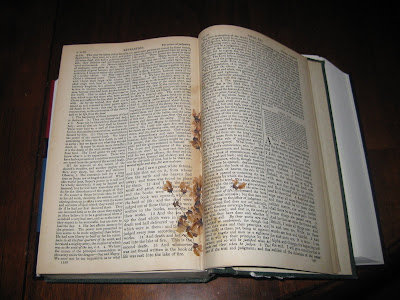 The picture here is inside the last volume of the five-volume set and covers Acts through Revelation. I was using this book to research and write my Systematic Theology I research paper on the Fall of Satan. Inside the pages regarding Revelation chapter 20 were these dried flowers.

What did they mean? Why were they there? Who put them there? The questions immediately came flooding into my mind. I wanted to touch them as they began taking on an almost mystical feel; a connection, I suppose, to those who are now gone.

I miss Alice. She was so kind to me while I was a young sailor recovering from the bitterness of having to leave Japan, a country I had fallen in love with. She realized my heart for preaching and studying God’s Word, and through these old commentaries, she helped make it possible. I’m so grateful for her life.

Whatever those flowers were for, and even if they were put there for some mundane, ordinary reason and forgotten, they will stay in that book for as long as I have control over it. For the connection to her, for the memories, for Aunt Alice.

What great memories. I have an Aunt who was instrumental in my coming to the Lord.

Aunts are just amazing. I have one who is in seminary. She's the reason I decided to go back. Just amazing people.

Thank you, Sheldon, for sharing this post and pictures. I have some fond memories also of visits to San Diego. It was nice to hear these memories from your perspective. I think our Grandma Smith (Alice's and Grandpa's mother) used to press flowers in books. Merry Christmas to you and your family.

Jennifer, thank you so much for writing on this post. It means a lot to me. I was hoping to get some more information. I guess that means that those commentaries are even older than I thought!

Sheldon, I'm not sure but these commentaries may of been your great grandmothers(my grandma Smith) at one time and was given by her to Alice. I think that I remember a set around her house. Are there any names in them? Your dad.