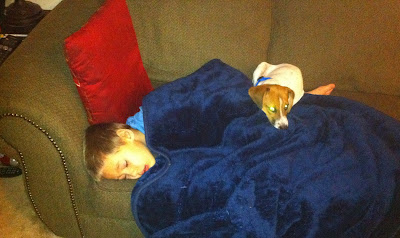 This is my son Timothy and the family dog Buckley. Buckley isn't integral to the story of course, but he does understand that Timothy is hurting right now. I have no idea how dogs do it, but Timothy's rough night became Buckley's rough night. That's for later though.

We were watching some programming for children on TBN last night before bed. At the end of a show they ran a piece about the staff visiting a children's hospital where dying patients were essentially in hospice. It was really sad as you might imagine. The staff was giving out toys "from Jesus", praying with family members, and talking about the Lord with these families.

I noticed a few minutes into the piece that my son was sniffling a little more than might be expected for a person who didn't have a cold. Before I could realize what he was doing, he broke out into full-fledged tears and sobbing! The poor boy was broken-hearted over the tragedy that we were watching on TV. These kids were dying and he was genuinely sad for them. Alicia and I comforted him as best we could, praying with him and loving on him as we spent time with him at his bedside.

We even let our dog stay in his room last night, which is a strict no-no, but Buckley realized something was wrong with his boy and didn't want to leave him and it made Timothy feel better too. Nevertheless, within a half hour Timothy was back out again, crying and unable to sleep. As a side-note, I don't recommend doing this as a bedtime routine! Anyway, Timothy stayed with us while we watched football and lay on the couch until he was tired enough to go to bed.

This morning, I was up before everyone else and was working on my computer (geek stuff) when Timothy came downstairs. I expected that everything would be over, but I asked a probing question just to see.

"Timothy, how are you this morning?" I asked.

"I just can't get it out of my mind," he replied. Then he lay on the couch again. It will probably be some time before he'll be able to let that pain go, and I'm ok with that.

We have prayed for our children to realize how "good" they have it and be sad for people who have less than we do. Yet I failed as a father in this desire because I've never taken him to see the truly poor, the sick, and the dying. I'm grateful for what happened last night because it shows his tender heart. We are now more committed to carefully, and in a controlled manner, showing him the pain of this world so that he can see the world from Jesus' point of view. He's got the most tender heart of any boy I've met, and I want to foster that into someone hungry to share hope with people.

My dream has come true. My son cares for others and is bothered by pain. Now we hope to foster that into someone willing to help those who can't help themselves. We are so grateful for what the Holy Spirit has done in Timothy's life so far and can't wait for what happens next!