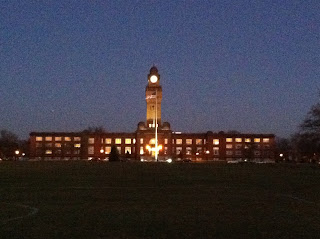 I missed the first official 5K of the year on the Great Lakes Navy Base because we were traveling back from my grandmother's funeral. Because of that, my first 5K of the year was on Monday the 2nd of April. I ran on the Navy Base in the monthly Morale, Welfare, and Recreation (MWR) event.

What I like the most about these races is that they give me a chance to test my ability against young Sailors who are in infinitely better shape than I am. What I like even more than that is beating them. I don't beat most of them by far, but I do beat many. Mostly it's because their studies are pretty demanding and I have a higher dedication to running than they do.

At any rate, I ran my first race without being in as good of shape as I wanted to be in. I can count the number of long runs I've done on one hand with 6 miles being the longest. Nevertheless, I lined up with about 230 other Sailors and civilians and took off.

I'll map the course some other time, perhaps during May's race, and show you, but the bottom line is that it's a pretty nice course. We get to run past the clock tower (pictured at night, above) and all over the base.

All in all, it was a good race. Can't wait for the next one! The only thing missing from this race were my good buddies ET1 Mike Harris, who is busy with his retirement paperwork (he retires Friday) and FC1 Jeff Martin, who was not selected last year for a PTS (Perform to Serve) quota. Missed you guys!

What is a Perform to Serve quota?

The Navy, in order to keep the right people and release the ones that should be released, established a program called Perform to serve. They have a certain number of quotas each month to give to people who are reenlisting or transferring. My buddy didn't get a slot.

Is it a case of "Your are not good enough, good bye"?

I'd definitely like to see a map of the course, and maybe some more pics. Glad you enjoyed the race. I am confused about one thing, though. How do you not beat many of them, but beat many?

BF: Yes, that is essentially correct.

Nate: I'll GPS track it on the 25th when I run my next race and post it both to this and the next race report.

Good point on the miscommunication. I'll fix it ASAP.