5K Race #2 just about killed me

I put "hot and miserable!" on my status for runkeeper, but the fact was that the 5K I ran on Thursday of this last week as so much worse than that. The temp was at 83 degrees with 60% humidity. Sure, some of my adoring readers have ran in worse conditions, but they hadn't been running in dry and 50 degree temps for almost all of their training runs.

Anyway, I did very well on my first mile, making good progress. I ran the first mile 8:23. I thought that was pretty good considering the weather. Then it was like I hit a wall. I remember hitting the asphalt around the clock tower on base and just about quitting. It was sudden and demoralizing. I don't know if the heat ramped up suddenly or if it was just the end of my reserves, but I had nothing left, but I struggled hard. People were passing me and I shifted down from race to training. By the 1.5 mile mark, I shifted down again from training to survival. It was absolutely horrendous. Mile three was more of the same except I went slightly down in elevation, so that helped. I ran that mile about 10 seconds faster than mile 2, but obviously still horrible for me. Here are my stats: 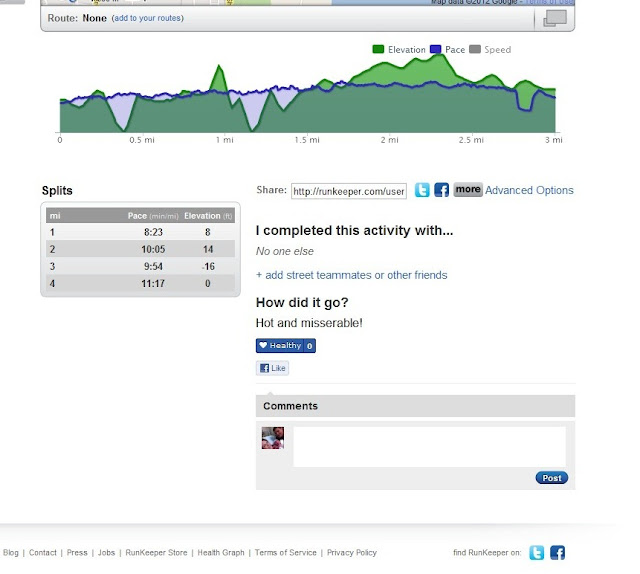 Here is the route we ran: 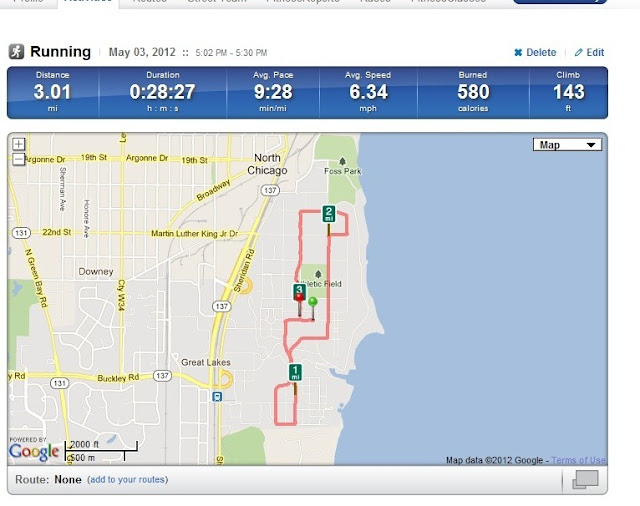 Honestly, it was the worst race I've had on the base, and I've run several. I've had it sleet on me before and that race was better than this one. Hopefully I'll get some better training in the heat for next month, especially as I'm training for the Fort2Base in September and the Chicago Marathon in October.

Yikes! It's amazing how some humidity and higher temps can make a huge difference in your running. Especially on race day. My trolley run was a great one, but it was 50-something degs and sprinkling: perfect running weather. The Warrior Dash yesterday was wretched. But it's an obstacle course, so it's treated a bit differently anyway.

There will be better runs, especially as you get used to running in heat and humidity more. Just be sure to stay hydrated. That's mistake #1 of even seasoned runners (I've been told anyway). If you doubt that you have not had enough water, you probably haven't. Drink up and keep running.

Excellent job. It looks like you stayed pretty consistent throughout the whole thing, despite wanting to quit!