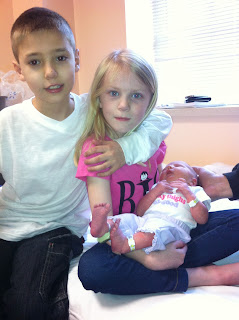 My children have quite possibly the best example of a mother. Alicia is humble, dedicated, and passionate about being a mother, and it shows every day. In frustrations, excitement, happiness, and a host of other emotions, she is a mother of the highest caliber.

And then there is Alicia. What I wouldn't give to be as humble and dedicated as she is to her task as a Stay At Home Mom (SAHM). She arguably does more than me on any given day and gets no pay for it. And during that time where she is often out-working me, she is doing it with a simple passion that I really can't explain, but that I can see very clearly.

She is a woman who wants our children to believe in Christ. More than just wanting them to, however, she takes great pains to show them Christ. She shows them through the Bible and through her actions.

Alicia also cares about other mothers. As a woman of some age (which will remain top secret) and the mother of an 8 year old, a 6 year old, and a newborn, she has quite a bit of experience. I've seen her work with other mothers and it's very intriguing. As a man, I would barge in on another man's life and say, "Hey, do it this way." Ok, not quite like that, but close. Yet Alicia is so gentle (most of the time) and truly cares about the women and young mothers she works with.

No, Alicia isn't perfect. This post isn't trying to prove her sainthood to you. That is between her and God and is none of my business. What I want to say is that I believe that she is fulfilling God's requirements for her and she's doing it in a way that is simply amazing. A great woman for a great day.

Happy Mother's Day Alicia! I hope that God will continue to bless your ministry to our children!