Samantha in the hospital, Day 4

I'm starting my blog post about Day 4 at a time when not really that much has happened. I'm hoping to stay on top of things better that way. We really went into our day thinking things were going pretty well. Sam had got a lot of junk out of her system the previous night and responded very well to treatments throughout the night. Throughout Day 4, her O2 stats were very good...low to mid 90s. That's good enough to be very happy about.

When Alicia told me about her stats, as well as how good the treatments had gone the previous night, I had to fight off some jealousy. I had wanted to be the one to give good news, since the news from Day 3 had been so nerve-wracking. Confessing those thoughts of jealousy to God, I got Hannah and Timothy ready and we left.

Around 10:00am they came to get an x-ray and then four hours later they did another round of Pulmonary Function Tests (PFTs). Basically they were checking for how much air she can move. On Friday, she tested in the low 40s. Today, I thought for sure she'd test much better. I was so convinced, in fact, that I basically called her recovery on Facebook and Twitter.

I was wrong. Despite her oxygen saturation going up to the low to mid 90s, both her x-ray and her PFTs showed no improvement. The doctor told me the medical term for this is “stable.” I have other words for it, but they don't belong on a Christian blog.

During one of her treatments, a gift arrived. Lola (grandma) Hindman had sent balloons and a new stuffed animal and some coloring supplies. She really brightened up when she got the gifts! 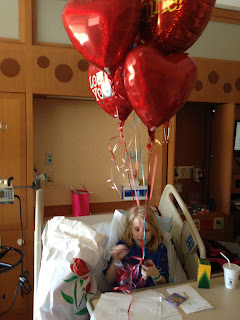 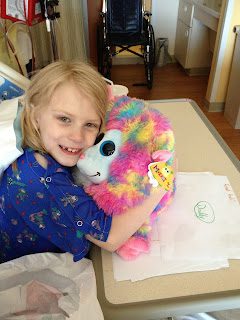 This is me helping Sam with her treatment. For some reason, she was not as excited about this. I'm sure she was just holding it in...maybe. 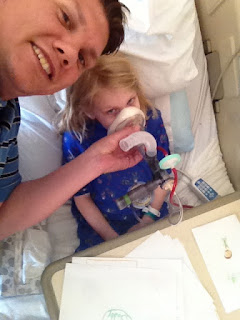 So we waited for what seemed like hours to see if they thought we still needed to do the bronchioscope or not. I was hoping that we wouldn't need to, but the wait was concerning me. After seriously waiting for hours, and asking for a doctor to come talk to me three times, I finally got someone to come fill me in on what was going on. One of the biggest reasons I was starting to get upset was that the respiratory therapist for the night, a different one from the previous night, wanted to only do one treatment at midnight instead of one at midnight and another at 4:00am. This means that for two nights in a row, with two different respiratory therapists, the orders got changed...by said respiratory therapists. I was started to get frustrated, especially since, for the second night in a row, with two different doctors, the orders had in fact NOT been changed.

So we learned that the lungs were still collapsed in the areas that they had been. The radiologist had ruled out pneumonia, for which we are grateful. No note had been made by any doctor about prepping Sam for a bronch procedure, so I'm assuming she isn't getting one. And after confirming that she really was supposed to get a treatment every four hours, I assume that the goal is to just continue treatments until she gets better.

I should say that the nursing team continues to impress me. Sam liked one so much that she drew her a picture. I think the nurse was impressed and promised to put it up on her fridge. Another nurse came in to change Sam's PICC line cap, and when she did, she brought me a foam pad to put on my very uncomfortable bed. I am extremely grateful for that. For the most part, all of the nurses have had Sam's best at heart and they have showed the utmost in professionalism and concern for their little charge.

Here is Sam's cap being changed: 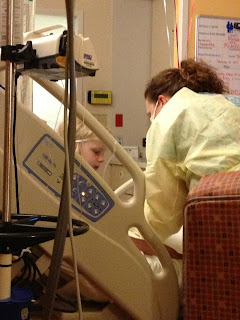 On another note, our pastor Steve Mathewson, from Crosslife Church in Libertyville, called me and prayed for us over the phone. He talked about our situation and my recent graduation with an MAR from Liberty. Thank you for the phone call!

That about sums up Day 4. I was frustrated most of the day, but it seems to be working out now. I hope it continues to do so. We shall see.