Samantha in the hospital, Day 7

It seemed like time was standing still. We were just waiting on things to happen for what seemed like eternity. Each day would pass and this or that would happen, and we'd just wait...wait until that magical Thursday to get here, when all of our dreams would come true.

Ok, so it wasn't like our dreams coming true, because that would be going home and getting back to normal (ok, our type of normal). But Alicia and I had become convinced that Sam needed a bronchoscope pretty badly, and the doctors wanted to wait until Thursday to do a new round of PFTs to find out if she needed it or not.

All of the sudden, Day 7 comes along and things start clicking. It started with various doctors coming in as usual to get their morning rounds through before the actual rounds start. Then I was called out into the hallway to discuss Sam's progress and discuss the plan of action.

After listening to the various opinions and expert knowledge, I was asked if I had any questions or thoughts.

"I just want to confirm something so I understand exactly what's going on," I said. "Sometimes I think that we aren't doing the bronch and you're just holding onto the scheduled bronchoscope time just in case. Then sometimes I get the feeling that we're doing the bronch and something would have to change in order to cancel it. Can you please tell me very directly which it is?"

"We are doing the bronch," said the attending physician, a woman with a Greek last name and the first name Diva...long "i". She's the bomb honestly. Anyway, she went on to say, "I didn't mean for you to be mislead. We expect to have to do the bronch. If her PFTs blow us away, then we'll cancel it, but we don't expect to be blown away."

I can't tell if everyone is tiptoeing around me because this is our first tune-up or if this is how doctors talk and I have to get used to it, but it really isn't cool to sugar coat things to the point where a father is confused. I'm not only my daughter's advocate, but I'm also their best bet for getting Sam to comply with treatments. Having me fully engaged is the best option. 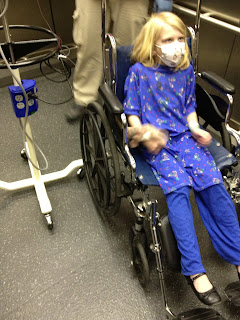 Sam headed down to do PFTs.

PFTs (Pulmonary Function Tests) were conducted around 10:30. She blew a 51, which was 9 points above last time, but not nearly enough to put off the bronchoscope. When I talked to the doctors after returning to her room, they were all on board with the plan and very informative. I think I'm finally starting to bond with some of the doctors.

After spending some more time in the room, we got Sam ready for the bronch. I explained some things to her while telling her that she couldn't eat or drink for a long time (I did that at breakfast) but after the PFTs, Alicia and I explained it in much more detail. She was concerned, but not scared yet.

Here's the irony of the whole thing. Sam is obviously doing much better. Her oxygen saturation is up, she's got energy, and she's not coughing nearly as much. She's feeling so much better, actually, that she took a ride on her IV cart. 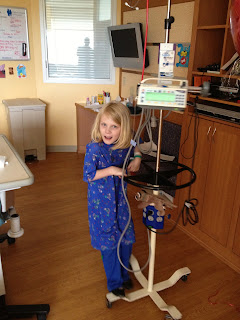 Yet she is also very sick still, as evidenced by the PFTs. So it was with a great deal of confusion that I went with her and Alicia to the OR preparation room.


Bronchoscope
We took Sam down to do the bronch around 4:00pm. She was in good spirits, but getting more concerned as we went. She came out around 5:30 and finished with recovery by 6:30. Here is Alicia's report (I had to leave the hospital to take Tim to an AWANA awards night:

1) 3 lobes were blocked (lower right and both on left)
2) Very sticky-even more than usual CF sticky; they had to work a bit extra to get it out-she said they did 2 CF bronchs today and Sam's was much thicker
3) The extra thickness could be just the way Sam's CF is or it could be from some "bug" in her lungs-results from culture will come back in a few days
4) It's normal for CFers to cough during this procedure, but Sam thankfully coughed less than the dr thought-this allowed the dr to stay in there as long as she needed.
5) Airways were inflamed (can be from the asthma or the CF)

So it was very good for the doctors to go in and clear some stuff out. Clearly the PFTs were a very accurate description of what was going on inside her lungs. 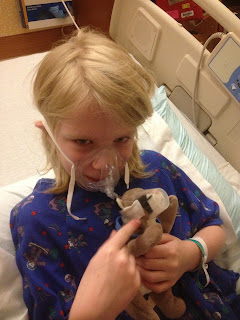 Sam's Mountain Lion (she received him during the PICC line) has to have an oxygen mask after his bronch too.

So our Day 7 was extremely busy and lots happened. Now we settle back down to wait. We are waiting on results of the culture from her bronch, waiting for the next round of PFTs to see if the bronch worked, and waiting for her to not need any oxygen anymore. Most of all, we're waiting to get out of the hospital.

Hang in there Dan. You and your family are going and have gone through so much. I am sure that it gets discouraging sometimes, but know that there are MANY praying for Sam and your entire family!