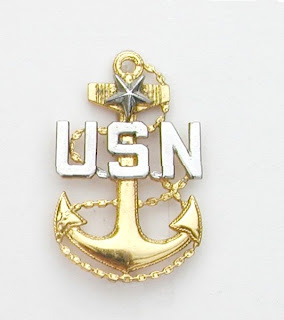 Chief results came out just a few days ago and much excitement over the new selectees has ensued. I personally enjoy this time of year a lot since making Chief myself a few years ago. It's much more enjoyable, of course, on this side of the table as I now have all of the answers and I get better sleep at night than selectees do!

Obviously there is a connection between a struggle with weight and Chief selection season (now called CPO 365 Phase II). If you fail a weigh in at any time during your career as a Petty Officer First Class, you might as well tack on four more years to your time as an E6. I know I did, and it's not getting any easier. I recently had to have "that talk" with a Sailor who failed her weigh in...it's a rough talk to have, because you have to tell the Sailor that he or she has just ruined several years of an otherwise good career. A struggle with weight is that dangerous!

I didn't think I was fit to help do too much during Phase II this year because I'm so overweight right now. I've definitely struggled more than I have in the past and an unhealthy fear of injury is fueling that struggle. Nevertheless, I am happy to report that I lost 1.8 pounds since last Tuesday! Can I call it 2 pounds? I suppose not. Anyway, I'm very grateful for the loss...any loss! I'll take it and try to roll it into a loss for next week. The Chiefs who make future Chiefs should be able to maintain the standards. We like to say we "own" the standards...so do I? Well, I know the standards, and I enforce them, even when it's marking down a failure on my own part. Phase II is the drive to succeed. This is my last one before commissioning as a Chief Warrant Officer

Anyway, yes, I'm taking part in CPO 365 Phase II. My weaknesses make me a viable part of the Mess and yes, I bring them along with me too. So here we go!

Next week I'll give an update on the Fort2Base race coming up on the 25th! And I have family coming in the week after that, so we'll talk about visiting family members the following week! Should be a lot of fun!

Congratulations on losing 0.128 stone! Today's Wall Street Journal has an article about diets aimed at men. I did not read it.

Keep posting. The problem with the rules is you have to obey them to properly enforce them. It is the log-in-your-eye thing.

Run the race well. I will cheer you on from my squeaky swivel chair. I could not afford the sky box.

Thank you so much for the encouragement. Someday I'll have a chance to thank you personnally, I hope.

I can't tell you how much I didn't want to post this morning. I wasn't feeling well at all and I didn't think I had lost anything. The little victory helped.

Yes, being the standard-bearer for the Navy has it's downside, but it's good accountability.

I shall report my race stats as soon as it's over (assuming I'm alive).