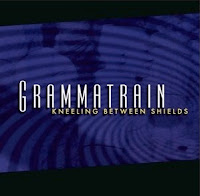 I like giving a "bottom line" before I get too far into most of my reviews, so let me just say that this album rocks! You can read more about it below to decide if you want to buy it or not, but just know here and now that this album is awesome!

I first found Grammatrain in 1998 while at C-School in Dahlgren Virginia. I had purchased a compilation CD of Christian music and Jonah, as well as Rocketship, blew me away. Since then, I have been a fan of the group! They are a Seattle flavor, so hopefully that will give you an idea of the type of music they play.


Pain, from the album Flying, is one of my absolute favorite songs of all time. Here’s a sampling of why:

Pieces of my life lay scattered on the floor,
I stare at them till I can take no more.
I do not deserve to be set free
Forgiveness is what I desperately need.
If it wasn’t for the perfect blood was shed,
Would I not be dead inside but I live now instead!

Then there was the Accident Experiment (fronted by Grammatrain’s Pete Stewart), which apparently alienated a lot of Christian followers. Since I didn’t know about this group or the music it produced, I was not alienated. However, this does bring up a problem…the new songs aren’t as “Christian” as the old ones. It turns out that Pet Stewart doesn’t consider himself a Christian anymore.

I bought the limited edition Kneeling Between Shields as it is the released version. Sadly, it does not have any overt Christian themes. I’ll be honest about that. I believe the band has now become one of “those” bands that produces covert metaphors. Here are some lyrics from the song Damaged off of KBS:

Can I see some metaphors in that? Yep! As someone who works with the Drug and Alcohol Prevention team on the ship, I see addicts ruin their lives all of the time, and a recovering addict would sing this. And having recovered from a lot of sin in my life, I also want to scream this. This is the motto for our generation of sinners saved by Grace. I want to scream this at Satan (and have)!

But it doesn’t say that Christ rescued him. What does that mean? What did Pete and the guys want to say in this song? I don’t know to be honest. Hopefully the band will clarify through interviews in the future as the remainder of the album is completed.

Until we find out the rest of the story, so to speak, we’ll be left wondering exactly what Pete Stewart means by not calling himself a Christian anymore. If he means he doesn’t believe in Christ, then this is a great secular album, but maybe not one that you'll want to associate with. If he means he doesn’t want to associate with some of the more overt communities of Christianity, but still considers himself a believer, then this is a powerful album about recovery and facing your enemy.

I look forward to finding out. Until then, I’m going to enjoy the album. You can get the limited edition by going to the the band's website.


You can buy Flying here:

Thank you for turning me onto this new cd from Grammatrain. I remember buying their first album many years ago and they still have an awesome sound! I'd be interested in reading an article about that statement as well.

Yeah, I wrote them about an interview, so we'll see if they go for it. I'll let you know. Thanks for checking out the blog!