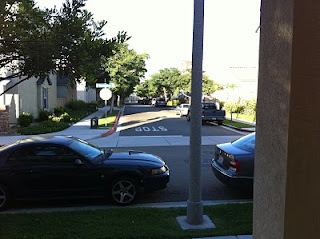 Taking long walks in the late evening is something I picked up from my dad while I was growing up. I remember seeing his silhouette often from my bedroom. What he did on those walks I'll probably never know. I remember taking some of my first walks as an adult back in Dahlgren, Virginia while in C-School in 1997. Often, back then, I would just walk. As I grew older, particularly in Little Rock during the early 2000s, I would daydream, thinking about writing great novels or becoming some great preacher…sometimes both.

When I got to San Diego, I met Dave Yumen, a Navigator working with the military in the San Diego area. I had become very interested in starting a men's group at my housing complex, and knew enough to know that I didn't have a clue how to do that. Dave was wonderful, and still is. He guided me through getting in touch with the chaplain of the base, setting up my Bible studies, and most importantly, how to pray for the ministry. It was he who took me on my first prayer walk.

It's not that I hadn't prayed on my walks before, yet this was different…way different. For the first time, my prayer had purpose outside of my own selfish desires. Now I wasn't praying for some book deal, or a promotion, or whatever. I was praying for other people! It was absolutely awkward at first…two grown men just walking around praying aloud to whomever might hear. Dave wasn't worried about that though like I was. He knew we were talking to the only one who mattered.

You know what? Nothing seemingly came from that prayer walk. The Bible study fizzled as soon as it started. I held three meetings where I was the only one in attendance and then canceled the ministry. I was a little heartbroken, but again, Dave Yumen was amazing. “Maybe the only reason you needed to do this was to show God that you were available.” I believe that now, but it was bittersweet back then. Anyway, that was about the last time I ever did a prayer walk. I'm sure I prayed occasionally through my walks over the following four years, but not seriously or consistently.

That changed a few weeks ago. My change in heart began as I would run past the Serra Mesa Christian Fellowship on Murray Ridge Road. I had already become impressed by the church for their support of a local elementary school, but the more I thought about it, the more I felt they could reach the military community that I lived in. I expanded my prayer ministry to the Pacific Hope Church on Afton Road. For each church I prayed that they would reach out to my fellow servicemen and women, as well as their respective families.

You see, I know that the military isn't a priority to many churches, even if the churches are near military installations. There are entire communities that need Christ, and military families aren't permanent, so I can understand the issue. However, I felt that these two churches represented a fighting chance, and I believed that they were already willing and meeting some of the military needs in the area, so I prayed, and continue to do so. I don't know the military makeup of either congregation, but regardless, I hope it grows!

About a week ago, I expanded my prayer to the military community itself. If I remember correctly, The Villages at Serra Mesa (my military housing community) has something like 900 units, which of course means that there are 900 families to reach for Christ. Not only do I need to pray for the local churches who will be reaching these families, but I need to pray for the families themselves!

You see, I used to think of prayer as an afterthought…something secondary to action. Yet my action rarely resulted in anything without prayer and submission first! So I have surrendered. May God do what he wants to with the families in this housing. The families on Afton Road, Krenz Street, Murray Ridge Road, and the rest of the streets that make up Serra Mesa. God is good…and he does have a prayer warrior in this community!

We're leaving for a new duty station, as many of you know, but I have completed my task for this area. Granted, I wasn't around to pray often as it took me too long to get going. Yet is anything too difficult for our God? I was late to the show, but I did my part here, and I am ready for my next assignment.

What about you? Do you have any experience with prayer walks? Tell me about it!