I am continually amazed at the number of people who say "thank you" to me when they find out that I'm a Navy man. I am so grateful for that recognition. I think of the Sailors of WWII and think of them with awe...that was the golden age of American Naval Power. I feel so inferior to those old salts. I've written before about how I wished there was a major naval threat to the United States in the modern era because I would love to have the same feelings that those old sailors had when they knew that the Yamato or the Bismark was coming at them and to have the confidence to face those great odds.

So it is with that background that I tell you about my childhood. It started with a front porch on an old Kansas farmhouse. On summer days, that porch transformed into the bridge of a battleship and I turned from a dusty farmboy to a full-fledged fleet admiral facing the Russian battlecruiser Kirov. She and her many escorts would be boring down on my meager fleet with speed and more missiles than we could count. 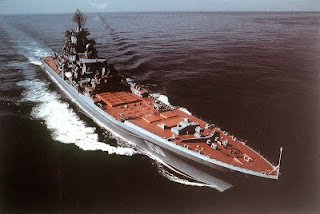 "Battle stations!" I would invariably scream. It always led to battle stations. Those silly Russians never pulled back.

"We've taken a hit!" my bridge crew would report. The mighty Iowa had been smashed by a major Soviet missile.

"Damage report!" I would demand. Many dead, some missing, many more wounded. Flooding in the forward compartments and fires aft. I walked out to the bridge wing and looked aft toward the back of the ship. Fires were topside the damage was so bad. Smoke billowed out of our stacks and through the hole the missile punched in our side.

"Return fire!" I shouted. My destroyer escorts lit up the sky with missiles and our Tomahawk Anti-Ship missiles tore away from the ship on the way to the Kirov battle fleet. That was back when we had anti-ship missiles of the Tomahawk variety.

Then a Russian sub fired torpedoes at us. That was before I knew that American battle groups sailed with thier own submarine screens. Somehow evading the destroyer screen, the sub captain got off four torpedoes before being sunk by one of my destroyers.

Suddenly, I was two escorts down as the torpedoes got one and one of Kirov's missiles got the other. My own crew on the Iowa was focused on fires and flooding. It was a mess of blood, guts, gun powder, missile fuel, and smoke.

And then the best thing we could have hoped for happened. The Russian admiral, perhaps confused by the battle or feeling too sure of victory, came in for the kill. The problem was I had 16inch guns and he had 5.1 inch. I was thrilled at my fortune!

"Status of the forward mounts?" I asked.

"Mount 1 down," replied the bridge officer. "Mount 2 operational." I didn't know then that they were numbered differently than simply 1 and 2, etc.

"Make Mount 2 ready and fire when able," I ordered. Still fighting the damage to thier mighty beast, my crew pushed through to prepare the big guns for revenge. 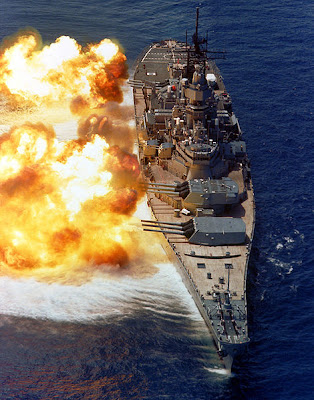 We won that battle, bloody though it was, and the Russians limped home with their collective tails between their legs. I sailed my victorious fleet into Pearl Harbor knowing that we had done well.

So that was the life I lived before the Navy. It was all about awards, fast ships, and massive battles. I loved every minute of it. So the next time you tell me thank you for my service, you can know that it all started on the front porch of a farmhouse in Kansas.