In my heart, I want 2012 to be stronger and better than last year. I don't know if it's because I'm getting ever so slightly older or what, but I am a little cynical. Honestly I don't have much faith that I'll actually reach any resolutions I set, particularly about weight loss and eating habits.

Furthermore, I see 2012 as a continuation of 2011. As a Sailor, I've accomplished everything I came to Great Lakes to do, so finding a challenge at work will be…well…a challenge. I've got my eyes on a few things but we'll just have to see what happens with that. I'll keep you posted. The point is that you won't see any resolutions about work or the Navy.

The biggest thing coming up for us is the birth of Hannah Grace, who is due on or about the 15th of April. We are extremely excited for her arrival. The kids are excited, we're excited (and anxious!), and I think our extended families are at least intrigued.

As to goals and resolutions, I offer myself the following:

First, I want to run the Fort2Base race in September. I ran in the first one in 2011 and I would love to get a chance to run this one as well. Obviously, I'd like to beat my time last year. I was in very good shape for this one since I was going through CPO Induction, but I hadn't been able to train for a race that long, so this year is a unique opportunity as well.

Secondly, I want to run a marathon. In particular, Libertyville (the city where we attend church) has one in the fall and that is my goal. The Marathon has eluded me because of injury or other expenses, and this is my year to get that monkey off my back. Granted, it's a monkey I put on my back, but I still want him dead.

Finally, I want to take part in every MWR race in 2012. There are ten of them and they are free, so there is no excuse. They make great training runs for races. I can't say that that I won't want to join in other races, but these are the goals for the year.

2. Writing: I have a few goals for my writing. 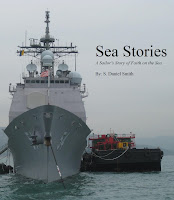 Number 1 is to be published again with a book. This year I published Sea Stories, but that was a self-publishing venture (not that it was easy because of that fact). My goal is to have a full-fledged publishing contract, no matter how small, with a publisher by the end of 2012. I miss writing and it will be good to be back in the hunt, as it were.

Secondly, I have a goal to expand my blog. In 2010 I had 5903 hits and in 2011 I had 5561. I need to bump that up to reach some other goals for the year. My goal for 2011 is to blog well enough to reach 7000 hits. That is a rather ambitious goal for the year, but I have some ideas as to how I'm going to make it work. Part of that is up to you, my readers, of course. Would you consider subscribing to the blog? Or putting it in your Google/Yahoo reader? That will help me a great deal! Thank you!

Finally, as to the other goal, I want to make $50 from my blogging efforts this year. As you can clearly see, I sell ads on my website. Each time someone clicks on the ad, I get a portion of the money. It's not much, but it's a start. If I make $50, then I will reach a $100 and get my first paycheck from Google, something that I've been wanting to do for a while. I haven't set a goal for the rest of my writing in terms of money, but definitely with my blog. So that's what I've got planned.

How about you? What are your goals for the New Year?

I'm going to run a half marathon. At this point, I have no desire to ever run a full marathon. But then again, I never thought I'd be committing myself to a half, either. I don't want to end up all skin and bones, but I do like running.