North Chicago is a city of 30,000+ persons. There are several churches in the city, although none of them are immediately close to the housing I live in. South of Martin Luther King Road (as you can see below), there are very few options, and most of them either on base or not evangelical. So the need exists. 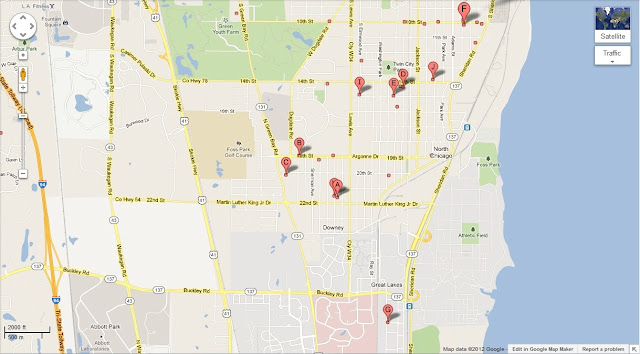 As I was praying last night, and reading an old book (published in 1906) called "Quiet Talks," it came to me that I should pray against Satan, not just pray for the people in the city. I was reminded that Satan was shown more than once in the Bible to be an actual, living, aggressor to God and his people, and therefore battle was needed. We are, as it were, a city at war.

How? Well, according to Wikipedia, the city has a greater number of poor, homeless, and single parents than the rest of the county, their immediate neighbor Waukegan the lone exception. The state of the school system in the city is another prime example of the spiritual war going on in the city. All you have to do is Google the news reports and you'll read about the board getting fired, the state taking over the district schools, etc.

It's not that another church needs to be planted, or that I am the man for the job. Rather it is that there is a losing war going on for this city and another outpost for God's force needs to be established. I know it's become taboo to talk about Christian matters in military terms, but I am a military man. It is what it is.

Please pray, and if you are praying, pray harder.

It's going to take much, much more than prayer to break the grip Satan has on that place. Not quite the epicenter of Armageddon but close to it.

My faith tells me to disagree with you on your comment. However, I do understand your sentiment. It would take more than positive self-talk to break the hand of Satan here. I mean something a bit stronger when I talk about prayer in this case.

(with a snooty British accent) Agreed, my good man.....agreed.

Chicago is not unique it its problems. Here on the shore of another lake we have the same problem. Prayer is the priority. It is how we get the "hands and feet" of which you spoke. I recall an earlier comment on a previous post.

I think I've written this elsewhere on this blog, but I think America is spiritually past a crossroads. We as a collective have taken the road more traveled (Matt 7:13), and it's affecting everything. The entire country seems to be more of a mission field now than even when I was a kid, but maybe I was just blind back then, I don't know. Either way, there's a lot of work to do.

I've been distracted lately, so I need to get back to praying again as hard as I was. Got to get on it.