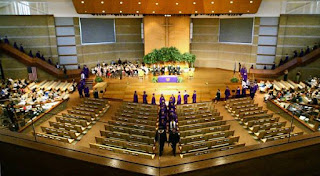 A Milwaukee area high school has become the center of attention in what may become a Supreme Court case pitting a school district against some of its students.

Nine students sued the school district in New Berlin because the high school holds its graduation ceremonies in a local church. Those who argue for the church use justify it by saying that the school doesn't have facilities that can be used by the students for such a public event. Opponents of the practice note that students receive their diplomas under a huge cross. One commenter stated, "stop and think about how it would feel if their high school graduation ceremonies were held in a Jewish temple or Muslim mosque, where diplomas were handed out beneath a looming Star of David or Islamic crescent." By the way, follow this link to the article.

Alicia and I discussed what we would do about this scenario yesterday and I'll spare you our contingency plan for the time being because I want to focus on a broader picture. The issue is public establishment of religion, which is what the school district is being sued for. That is a violation of the First Amendment.

I can't tell you how many debates I've been embroiled in because of the nightly prayer underway, or invocations before retirement ceremonies or half a dozen other public displays of religion in the US Navy. Religion has a very good hold traditionally in he Navy at least and doesn't seem ready to exit the scene. Obviously, not all of that is evangelical in nature, but it usually is when I am a part of it. Also, the sheer realization that the government pays the salary of preachers (chaplains) really upsets some folks. They often bring up the establishment clause of the Constitution and ask me to justify the government funding. I don't get too involved int he argument, by the way. They are arguing with the wrong guy about that. They need to go much higher up the food chain.

Will the case pending in the Supreme Court have any effect on my ability to have a prayer ceremony before my commissioning in December? I doubt it, but it is an issue to watch. I expect that, someday, chaplains will be much more regulated, and when they are, it will be up to regular Sailors to carry out the daily religious (evangelical in my case) work on ships and shore bases. Churches must prepare to support, just like you support missionaries overseas, and Sailors must prepare to be their own chaplains. It's only a matter of time...

Great article. Amazing poignant thoughts. Given that the constitution is written, without it changing do you think these limits are an appropriate use of separation, or are they too broad or not broad enough for that matter?

Are you speaking of the school district or religion in the Navy? As far as the school district is concerned, it is my opinion (and mine only) that it isn't an establishment of religion to have the graduation at a church. The religion is already established and the school is merely using a building. I researched the case in 1947 briefly for more information on that and it suggested that the state would have to actually establish a religion to be in violation. If I were in that situation, and the graduation is in a mosque or something like that, then I just wouldn't have my kids attend. What are your thoughts?

Why is the church facilitating an atheistic organization? Why does no one look at this from this perspective?

BF,
Excellent thought! Extremely funny and yet way too true. We do this all the time unfortunately.

I agree that it is not inherent unconstitutional to hold the event in a church, provided a non-religious venue is not available under reasonable attempts.

It definitely has the potential for abuse if let's say a ton of pamphlets we left at the entrance or something of that nature.

As to the anonymous comment, a church has the obligation and desire to reach everyone, so if they feel they can do that in a manner that is not traditional, then isn't it better from the churches perspective than being empty on a Friday?

And my comment was for this case specifically not the broader issue of chaplain's etc funded by government.

I think America is crossing all kinds of lines, this just isn't one of them in my opinion. I can fully imagine it being awkward to be a jew, muslim, atheist, etc, but once again if reasonable attempts were made to find a "neutral ground" and one wasn't available, then I think neither the spirit nor the law of the constitution is being breached.

The church is giving a de facto endorsement to the school. Tax-funded education was sold to the American public as an Utopian concept: it would end poverty and crime. Biblical Christianity and tax-funded, government controlled education are rival systems. It is a Cain-Abel relationship. Understand also that government schools operate on two principles: kidnapping and extortion, euphemistically called taxes and truancy laws. Christianity is voluntary, schools are coercive. Public ed. is a mafia.

Frog, even accepting your premise that they are rival systems, it in no way follows that allowing a function on their property constitutes endorsement. They could, as stated before, be doing it simply under the assumption that God will allow students to see the light.

Also, just to be fair, the topic is whether or not this is constitutional, not whether it is a good idea or a wonky one. I think there are many wonky constitutional laws as written. But that wasn't the question asked.