Samantha in the hospital, Day 2

I'm awake at 4:30 on Sunday morning after Sam's oxygen mask slipped off and the machine alerted us that she dropped below 90 on the O2 reading. After getting her mask back on (I wish she could accept the little nose tubes...might try that again later), I tried to lay back down but couldn't sleep. With that in mind, I decided to get to writing and make this update happen.

It took awhile to get our family back together after I had taken baby Hannah and brother Timothy back home Friday night. When we finally hit the road, we had to deal with a massive detour on I94 in Wisconsin. Anyway, we did manage to get up safe and sound and it is then that I learned more about my daughter's condition.

Dr. Q, who is the lead CF doctor at Children's Wisconsin, came by on morning rounds and talked to Alicia about Sam's situation. She pointed out on the xray that she either had pneumonia or a partially collapsed lung. Thankfully, Alicia didn't tell me this information over the phone. Not sure what I would have done about that. Anyway, since Sam doesn't have a fever, the Doctor Q believes that it's the latter of the two possibilities. Basically, as I understand it, the mucus has become so stuck in her lungs that no air whatsoever can get to a particular part of it, which has led to the collapse.

The goal now is to kill any infection that is in the lungs (in case it is pneumonia) and get that junk out. However, there are a few complications, the main one being that some of the treatments that they would use to get the mucus out cause her problems in the asthma arena. For example, the doctors would like to use hypertonic saline solution to help break up the mucus, but that inflames the lungs, something we cannot afford at the moment because Sam is really struggling with the asthmatic component of her CF. It's just going to be a little bit of a process to take care of the competing issues.

We are extremely grateful, however, for our friendships. On Friday (Day 1), I received half a dozen texts or phone calls from coworkers asking me if I needed any help. Then, on Saturday (Day 2), one of our neighbors sent a gift bag of coloring books and stuffed animals with me to Wisconsin and another neighbor, the mother of one of Sam's best school buddies, brought her friend up! You've never seen Sam so happy as when Savannah was in the room. 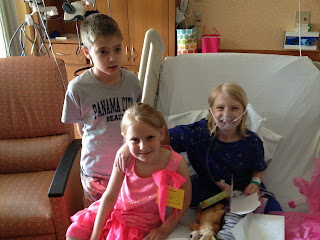 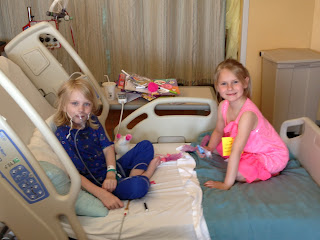 When it became clear that Hannah wasn't going to make it much longer without a nap, we said goodnight to mom, brother, and sister and they headed home. It was then that I got to meet the IPV machine. As you can see, it looks like it's trying to suck Sam's soul out of her, but in reality, it's just another one of the tools that the doctors and nurses use to break up the mucus that's hurting her and get it out. 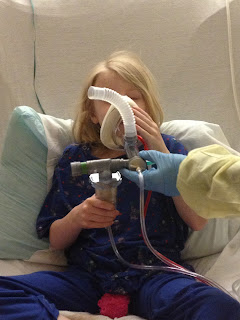 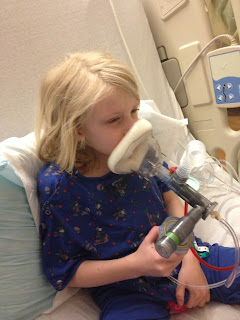 Finally, the day ended in some disappointment. Almost as soon as Alicia and the other kids left, Sam's attitude sank. She began getting defensive, argumentative, sarcastic, and fought her treatments. After the IPV treatment, wherein her attitude was atrocious, I decided to have a talk with her. It was that or threaten her life because she was definitely acting in a way that is not acceptable in my house. When I finally got her to talk to me about the problem, it turned out that she missed her mom. That's when she started crying. Disclaimer: Sam cries about everything. It takes some investigative work to find out if they are real tears or not. These were real. Alicia was already back in North Chicago by that time, so I knew it was a lost cause for the night. When I asked her if she'd feel better if her mom was here and I was gone, she said no. It became clear that she just wanted her family together. She did let me hold her for a few minutes until the crying stopped and we settled on a TV show to watch together. Then, exhausted from the day, Sam and I both fell asleep.

We could really use some prayer for Sam's attitude and her heart. Because siblings can't sleep overnight in her room, we can't both be with Sam at night. So please pray for her little heart as she deals with the feelings of missing whichever family members aren't in the room with her.