Every now and again, something comes along that simply rewrites your expectations for productivity and elegance. Heading into December, I had listed Semplice5 as one of the best unknown Linux Distro of 2013. As it was clearly nearing the time to make such decisions, I felt Semplice5 had it locked up when up against other minimalist distros. Whether SolydX 201311 was that good or not remains to be fully decided (and will be within the next few days). What I can say, without a doubt, is that SolydX hits a clear home run with their xfce desktop with a few exceptions, noted below.

The SolydXK team makes a KDE version as well, which you can read about here at LinuxBSDOS.com. They do an amazing job of reviewing the KDE desktop version, and I will attempt to do as well with the Xfce release. I was interested to learn that the LinuxBSDOS reviewer felt that SolydK didn't bring anything new to the table, so I wonder how I will feel about it by the end of my testing. Remember that my testing usually focuses on the end-user experience, and it's often based on comparisons to the main distros like Mint, Ubuntu, and Fedora.

At first glance, the desktop (shown below), is very clean and largely devoid of obnoxious app docks or desktop backgrounds. Very simply, SolydX has it's name and an app to install. Other than that, you have your home folder and the HDD folder. Everything else, as is the case with Xfce, is through the Menu button on the bottom left. 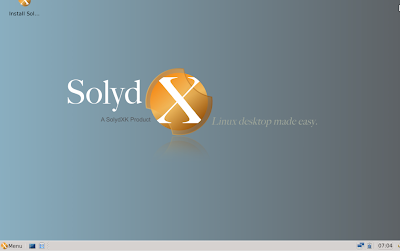 Like most distros, it already recognized my test computer's wireless card and had my home wireless router ready for me to click on and input my password. The distro comes standard with Firefox and Thunderbird for web browsing and email, respectively. Also standard is the Pidgin chat, xChat IRC app, and Transmission torrent downloader. These all seemed to operate normally. 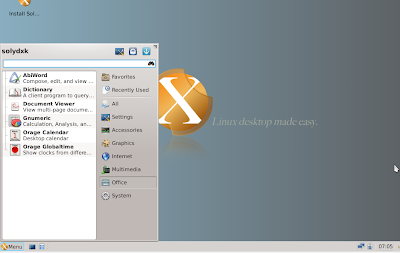 SolydX then does something that I really don't understand. I'm sure it's to save space, but it just doesn't make sense. Instead of coming with OpenOffice or LibreOffice, they come standard with AbiWord and Gnumeric. This is just honestly backwards. From a purely end user mindset, I want a fully-functioning office suite, not a hunt-and-peck conglomerate. Until these smaller distros figure this out, they will have a hard time making it big. What makes this even more intriguing is that their business edition does come standard with LibreOffice! Honestly, this is a costly error, in my opinion. If it's to save space, then find a different way to save space. The distro isn't any smaller than Manjaro 0.8.7, which carries LibreOffice, so saving space can't be the issue.

Was this their only error? For the most part, I believe so. The distro is amazingly light on resources. Even though the Live CD version lagged at times on my test computer, it was because it needed to access the DVD ROM, not because the distro was actually slower. I had no such delay when testing via my VirtualBox. It's also amazingly easy to get around. One of the issues brought up by the KDE review was the lack of an automatic firewall. I can see how this is a concern. Indeed, when I looked at the Firewall Configuration, it was off. I think this is something that can be dealt with fairly easily. With an easy-to-use GUI, it's not difficult for even a novice user to change this setting. And since it's right on the menu, instead of Microsoft Windows' control panel, it's more apt to be recognized by the novice user. 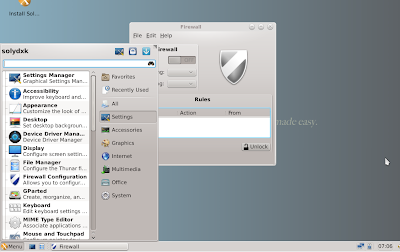 Another issue that is just inconvenient, not a killer, is that my touchpad isn't fully used by the distro. Now, that probably isn't completely the fault of the SolydX developers (I assume again that this is a space-saving issue), it is something that I find mildly annoying. First, in SolydX, I can't use my tap function of my touchpad. I have to use my two click buttons. Second, scrolling is non-functioning. Both of these work fine in my main distro (Ubuntu 12.04). The Manjaro 0.8.7 live CD also has trouble with scrolling, but not the tap function.

My Take: So, does this displace any of the other distros I've reviewed this year? Not really. It does make me rethink the idea of the minimalist distro, especially at a time when it seems like many distros are shipping with the lack of a good office suite. From the end-user support, I just don't know how they can be for the masses without office compatibility. The only exception is if you're making your distro for a tablet, and none of the ones I've reviewed are doing that.

SolydX is gorgeous. It is light, simple, and pretty. Unfortunately, it also lacks some really necessary things, like better driver support and of course the ever-important office suite.