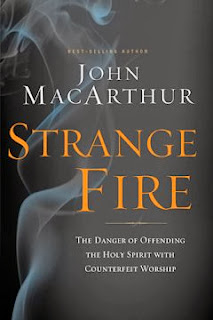 I listened to John MacArthur's Strange Fire conference a few months ago and wished that he had done things a little differently. I have worked with charismatics before and while I truly think that some of them are on a different path, I also believe that some are true believers in Christ. Like all labels, suggesting that all Charismatics are heretics is a recipe for disaster.

So it is with some trepidation that I decided to review Strange Fire. Because I have valued what MacArthur preaches and writes since I was a boy, I wanted to believe that his book would be of value. I had hoped that he would tone down the rhetoric and focus on the necessity. I was both right and wrong.

He did not tone down the attacks one bit. If anything, some of them are more powerful in the book than from the conference. However, what he did do, that I really appreciated, was focus his attacks on those behind the Charismatic movement, not the individual believers. This set me slightly more at ease. The vast number of referenced remarks set me even further at ease.

One of the things I latched on to more than anything else was the issue of tongues. I have worked with a Pentecostal before, early in my ministry. We often preached together and prayed for our ship as a prayer team. One night, while praying, he started speaking in what I can only assume was some sort of prayer language. It unnerved me a great deal. Honestly it freaked me out. I grew up essentially baptist, so hearing what I thought was mere gibberish in a very spiritual sensitive moment was very scary. I asked my friend about it and, after he had explained it to me, I asked him not to do it again. He obliged and it never came back up.

I wish now that I had pursued the matter further. I don't think my friend is really a charismatic anymore, but I suppose he still believes in the gifts. I think, by the way, that MacArthur's book does a masterful job of explaining the issue of tongues.

Strange Fire is one of MacArthur's best books yet, and I've read many. Get a copy and learn about the charismatic movement for yourself. It will open your eyes!

To understand the importance of tongues in the life of the believer, you must first have an understanding of your 3 fold nature. You are a spirit (consciousness), you have a soul (mind, will, emotions), and you live in a physical body (5 senses). Most people pray out of their mind, using their intellect; however Paul said I will pray with my mind (intellect), and I will pray with my spirit (tongues). When one prays in tongues, your spirit is in direct communion or fellowship with the Holy Spirit. The results is what you and John MacArthur call gibberish. You’re focusing on the gibberish and not what is taking place in the spirit. Paul said he that speaks in unknown tongues, speaks not unto man, but unto God. In the spirit he speaks mysteries. You need to read 1 Corinthians 14. Johnny Mac has this one wrong. If you want a deep relationship with Jesus through the Holy Spirit, then I urge you to develop your prayer language. If you are happy and content with what little bit of religion you have, then so be it.

Anonymous,
I wish you had posted a name with this, so I can know if I'm dealing with someone I know. Nevertheless, I would be interested to know if you read MacArthur's book or if you're only going off of what I wrote. Obviously, arguing against John would be productive only if you argue against him, not me by proxy.

I think that the biggest thing I took away from Mac's book was the need for ministry to be productive for Kingdom work, and in my experience, tongues does not accomplish this task. It may be defensible (I don't agree though), but it is not productive.

And there is no need to suggest I have a limited religion. My faith is growing each day, with assistance from the Holy Ghost, without the need for tongues.