SparkyLinux is a very intriguing distro. I’ve played with it before, but never reviewed it in earnest. I’ll get into what I like and don’t like about them towards the end of the review, but first let’s start with what SparkyLinux is: “SparkyLinux is a lightweight, fast and simple Linux distribution designed for both old and new computers featuring customized Enlightenment and LXDE desktops. It has been built on the “testing” branch of Debian GNU/Linux.”

As can be seen by reading just about any of my reviews, I like to review a given distro by first looking at it on my MacBook Pro before testing in on my Toshiba test laptop. Someday I’ll write a post explaining why I like doing that. 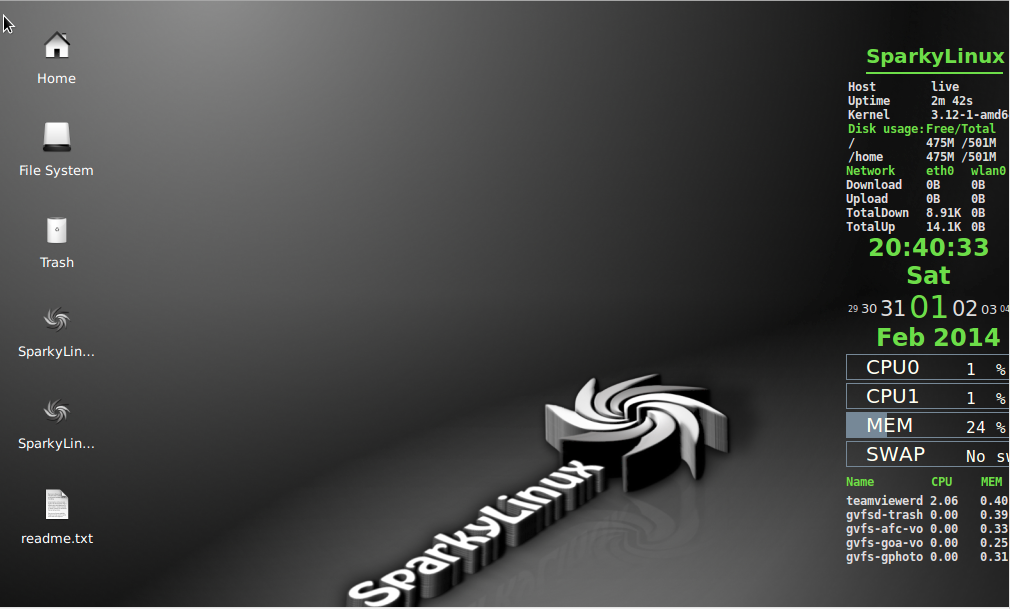 Having said that, I liked how it looked on my VirtualBox. Loading it up on VB, I immediately noticed the wonderful appearance of the standard desktop. Along the top you will find the standard Menu bar, including status icons for networking, date/time, user information, etc. On the left side, you have the home, file system, trash and (on live CD version) the install icons. Along the right hand side, there is a rather large system monitor bar (Conky) akin to Windows gadgets, although there is far more information on SparkyLinux, and to be fair, Windows gadgets look better.  Finally, at the bottom is a bar akin to the Mac OSX icon bar. It is very functional, even on my old Toshiba.

Having said that, I really enjoyed the experience. I am a somewhat experienced Linux user, so Conky didn’t bother me. On the contrary…I enjoyed knowing exactly what my computer was doing the whole time. If you choose to test SparkyLinux for yourself, then you’ll see what I mean. Conky makes testing SparkyLinux very convenient.

SparkyLinux comes with a standard load of applications that you would expect to find in most mainstream Linux distros. It uses LibreOffice 4.1.4.2 for office applications, which I believe give it the best chance to compete against Microsoft Office. LibreOffice now has 4.2 on the street, but it just happened, so SparkyLinux can’t be faulted for sticking with a 4.1 variant right now.

It comes with a lot of games, most of which are pretty simple and not that enjoyable, but most interesting is the PlayOnLinux app. I’ve used WINE before, but I had never heard of PlayOnLinux. I guess I should have guessed that it was based on WINE. 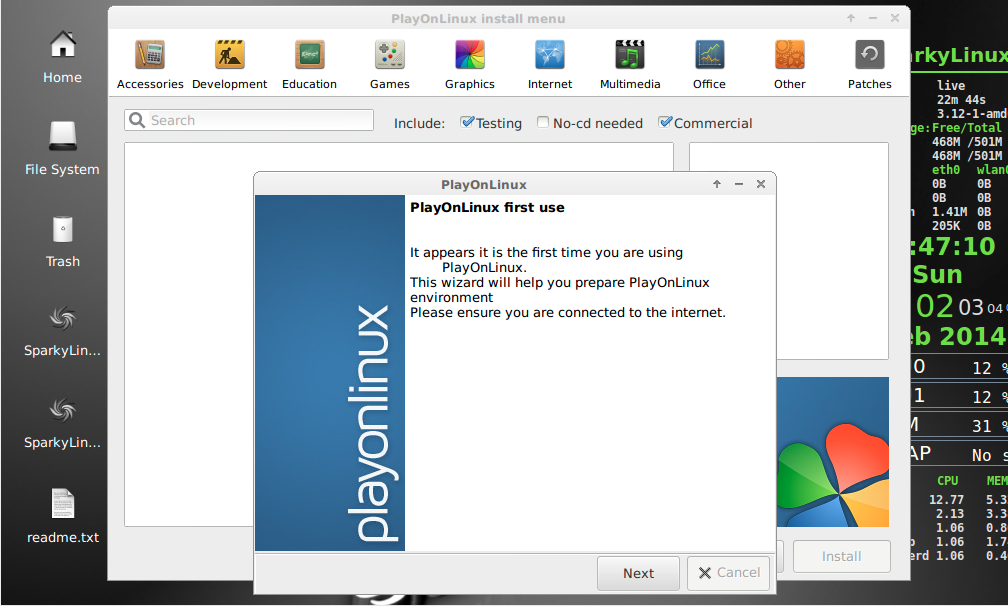 Web browsing is accomplished through IceWeasel, which is a rebranding of the Mozilla Firefox for Debian. This seems fishy to me, as Debian simply took the Firefox sourcecode and renamed it so they didn’t have to comply with Mozilla’s branding rules. This begs an entire blog post of questions about the philosophical issue surrounding open source agreements and how far they should go to prevent other open source orgs from using not-quite-so-proprietary information. At any rate, IceWeasel works fine, as it should.

On a final note, dropbox comes standard with SparkyLinux. I use Dropbox extensively to move files between computers, including between work and home (Word documents only, no actual work files). It’s easy enough to get a program like Dropbox, so it’s not the biggest selling point. However, knowing that the SparkyLinux developers are forward-looking enough to know that it’s necessary is a big point in their favor.


Installation was not fun. First of all, SparkyLinux recognizes the installer program as an untrusted application (see below), which is just awkward in my opinion. It makes me think of Windows not trusting other Microsoft applications. I’ve never personally seen this before on Linux, so I was disappointed to see it here. 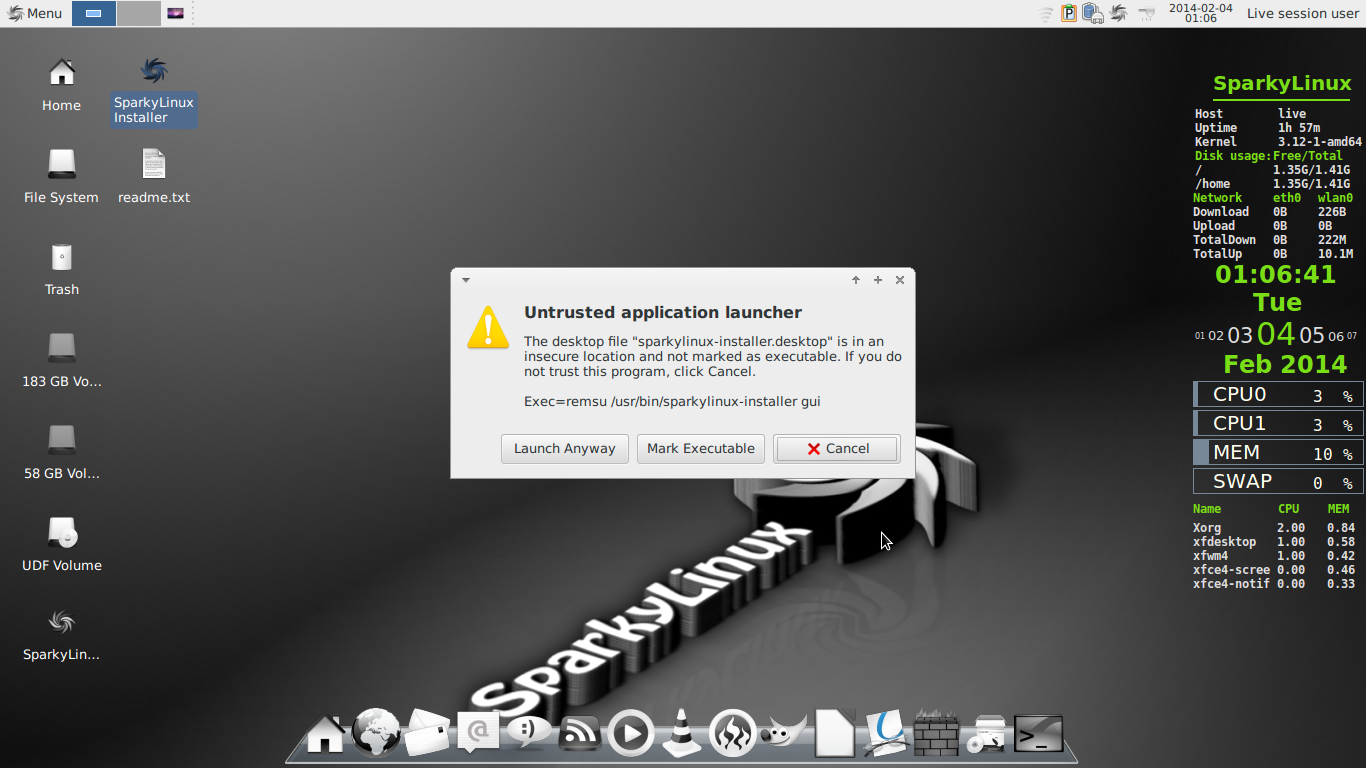 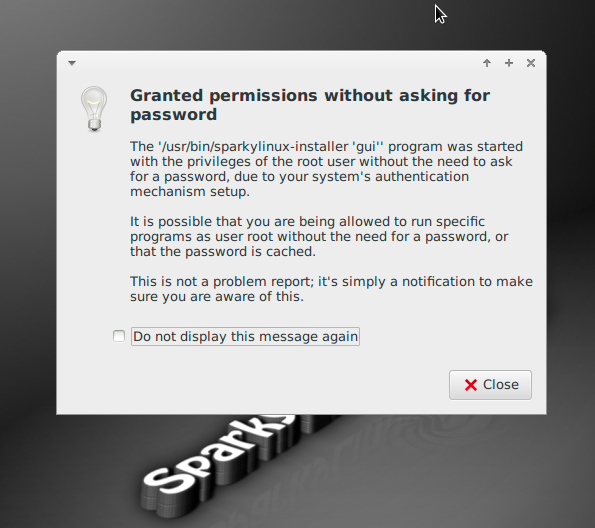 Overall, I was not impressed with the install experience, and a novice user will not find it usable. Like another reviewer of SparkyLinux, I think this is a weak spot for the distro.

SparkyLinux 3.2 is no slouch when it comes to performance. It provides very little drain on resources as it performs tasks in applications such as IceWeasel and LibreOffice Writer. Some of this, of course, has to do as much with the applications that are being used as with the OS running them, but the important thing to note is that SparkyLinux isn't the drain.

At rest, the distro uses only 1-4% of the CPU and 5% of my laptop's 3GB of RAM. Thanks to Conky displaying real-time stats on the right side of the desktop, I can see exactly what is using the resources. At rest, Conky is actually the biggest drain, at a whopping 1% of the 2% CPU utilized.

Once I start typing on LibreOffice Writer, the CPU jumps to 5%, with LibreOffice using 2/3 of that. Same thing happens when I start working in IceWeasel. Bottom line on this is that SparkyLinux isn't a resource-hog. Of course, we could have assumed that. However, battery life isn't quite as good as could be hoped for. Battery life is often a topic of interest in any given Linux distro, and the issue is quite popular on the internet. Since I am running off of an older system (over 3 years old), my hardware undoubtedly bears some of the blame.

SparkyLinux 3.2 gets good grades for performance, especially considering the fact that my laptop isn't a spring chicken and that Windows 7 used to bog it down so much that it was unusable.

I’ll say right up front that this distro isn’t going to be displacing Ubuntu for me. It’s not as polished and doesn’t work as well. I think, especially for novice users, that it’s not friendly enough. In order for Linux to be mainstream, it cannot require more from people than Mac OS or Windows does.

Having said that, I do like it and I think it has promise. Its desktop experience, especially its Mac OSX-style bar, shows a lot of possibility, and its range of standard applications is impressive. For those who are interested in playing with a distro that might need some experience to make effective, then go for it. It’s just not for the average user, and certainly not for the novice.

The error message about the installer not being trusted is not really a problem. It is merely that the launcher did not have it's execute bit turned on, something the distro creator should have checked before releasing the distro into the wild. Merely clicking to mark the icon executable will solve the problem.

Man, thank you so much for this comment. Never, in playing with over a dozen distros, have I seen something like this. I hope the creators see this so they can fix it. Thanks again!

Most of the Linux distros which I am familiar with do not require being root to install, including Ubuntu back when I used it.

I don't recall needing to use root password to install from a live usb, it is used once you've installed and selected different passwords for user and root. I think it's a Debian feature to allow you to have a master password so you don't need to retype the root password all the time, except when you open applications that might affect vital aspects of your install, gparted, for instance.

I'm not very keen on Xfce but after reading your review I installed this Sparky flavour and let me tell you I enjoyed pimping it up!

If you still have your install, explore the goodies, such as Disk Drive Manager (to upgrade your kernel to the highest possible) or the Sparky backup tools (you can back up application settings, docs or even remaster an iso with the current version after your tinkering).

In my opinion, the fact that it offers lightweight DEs but is based on Debian Testing makes Sparky the best option for senior hardware, like mine and the Xfce is perhaps the best Sparky flavour so far.

Most Linux's need a sudo command to administrate. It's a bit safer than su.

I really like your reviews. However, this time I would have liked to see how we can remove Conky, if we don't want it.

I also liked this distro quite a bit, eventhough the first update included over1GB and 1092 packages. Also After the update I can't shotdown the system from either the menu or taskbar. I have to use the shutdown - h now command in a root terminal. I'll be dumping this one pretty quick.