Not all of the places I've been to are exotic or even outside of America. In fact, one of my favorite cities in the world is San Francisco. Now, I don't live there and probably couldn't afford to, but as for being a visiting sailor, it's tops!

It was a very cold day when we pulled into San Francisco. We just about froze to death manning the rails in our dress whites (it was mid-May). By the time I got off the ship later that day, I was able to feel comfortable in a sweatshirt, and the next day was even warm enough to go in a tee-shirt. Here are some views from the pier: 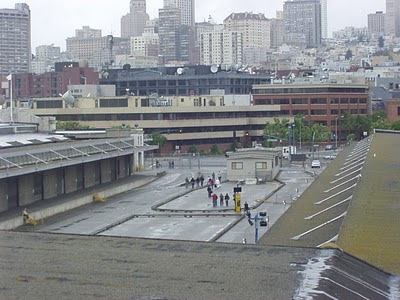 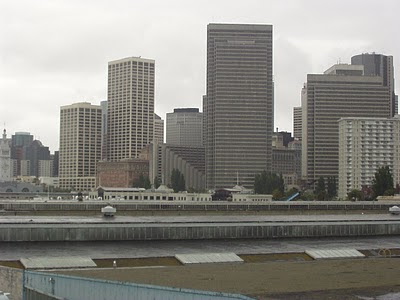 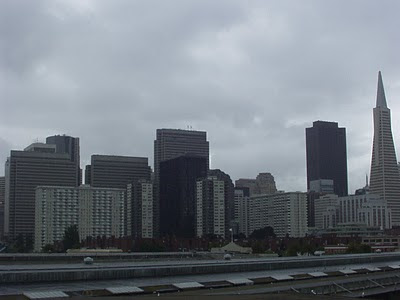 I didn't do too many things on this trip. My goal was to really spend time reflecting on my spiritual life and walk, and this is something I did a great deal of. My spiritual guide that weekend was Mike Moberg of the San Francisco Missions Outpost (SFMO). Mike and his wife Ann are simply wonderful. I'm sure they didn't intend to, but they essentially ended up adopting me for a few days while my ship was in port.

As with most ports I visit, one of my primary goals was to go to church. Three good friends of mine joined me at the SFMO. The SFMO isn't exactly in a great area of town, which is how it's designed. Mike and Ann are passionate about saving souls in the lesser-enjoyed areas of the city, and they prove it. 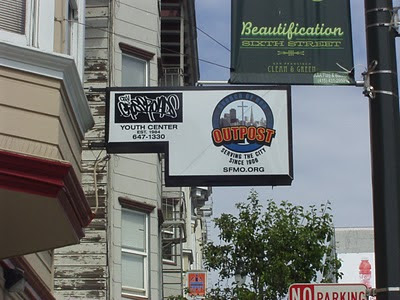 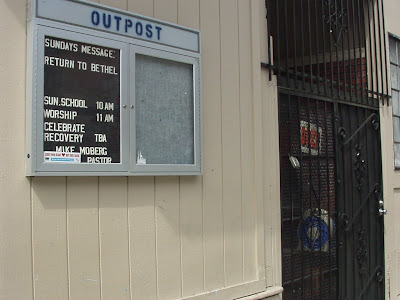 Yes, those are bars on the front door to the church...

I was completely and utterly amazed by these folks. Mike was awesome. He introduced my friends and I as conquering heroes and his congregation treated us as such. I shy away from that, because I go to church to learn from the various pastors and missionaries, not to be celebrated. Unfortunately, I didn't get to tell Mike that before the service began.

Cameron, Mike's youngest son, led music with power and passion I have rarely seen. I've got a copy of his CD and I wish he was making more. Hopefully there will be more out soon. This guy is awesome! And that's not the only thing he's awesome for. Take a look at the artwork behind me and the guys: 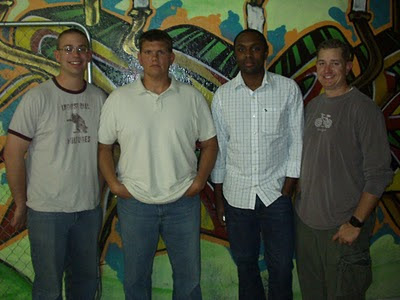 Here are some more examples of his work and the work of those he has helped pull from the streets: 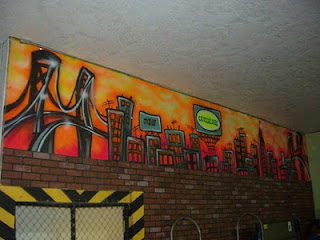 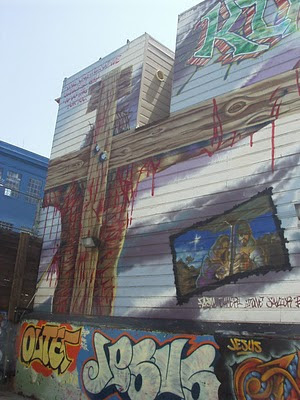 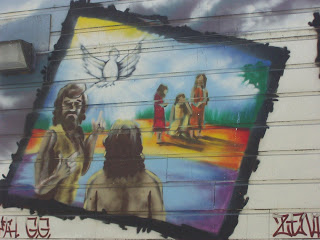 This is sanctioned art, by the way...not graffiti.

I can't tell you how much I enjoyed my time with Mike, Ann, and their children (all of them grown or mostly grown). It was refreshing to be with them. They supported me in ways I will never forget. I love them dearly.

hey dan thanks for all of the great things you had to say concerning our work in the city and comments on the book. I'm going to try and learn more about cf. praying for your family, your ministry, and your safety as you serve bro mike in sf

the comment on vanity publishing is true but for first time authors nobody wants your manuscript unless your the guy who landed the plane on the hudson. Mission wisdom is it's good to give them bread but it's better to give them the means to make bread... this is our attempt at bread making. Its purpose is to glorify God - bring awareness to urban ministry-bring interest & income into our work.... bro mike in sf

Mike, thank you so much for coming to the blog and leaving great comments! I appreciate the interaction and look forward to more in the future!