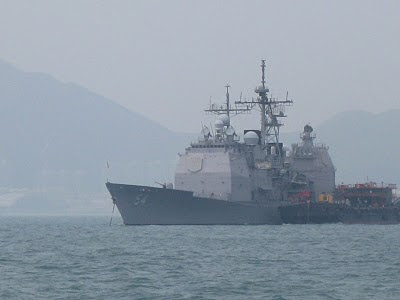 I was going to hold off writing this until my last official day on board, which is this coming Tuesday. However, I think the time is right as I'm saying all of my good byes on the ship right now anyway. I guess it's time to just say good bye.

Just over 8 years ago, I was leaving the USS Mobile Bay, my first ship, and one that I had loved for most of that tour. Even now, I mostly remember the good times, although of course some of the bad times prevail in my memory. I know you don't all want to hear about my sad stories, so I'll refrain. Just know that those feelings I had for the Mob I now have for the Antietam.

Leaving now feels surreal, as if maybe it's not right to go. I know it's time. Heck, everyone on board knows it's time. My boss, FCCM E., told me a little while ago, "FC1, you've ridden this train long enough. It's time for someone else to get a turn." And that is, I think, the general sentiment. Of course, I'm sure there are plenty of guys on board who just wish I'd get out of their way. Fair enough. And I'm sure there are others who just flat out don't care that I'm here or gone. They don't know me. Fair enough there too.

Yet I've spent almost 5 years of my life with this ship. It's an odd thing, to be on board a ship this long. So much has changed since I arrived. I've gone through 3 COs, 4 XOs, 4 dept heads, and a slew of division officers. Had some arguments with a former chief I still don't care for, although ironically I now have his anchors as they were passed down to me from the chief who got them from him. Does that make sense?

And I've been mentored by the best CPO since Jojo Vicencio on the Mobile Bay. FCCM Edwards may not walk on water, but he's close as far as the Navy is concerned (not spiritually, unfortunately). He changed my career path and I'm grateful for that.

Ok, I'm waxing a bit philosophical. It's time to move on. I don't like saying goodbye, so I'll just do my best to kind of "disappear" on Tuesday. In all, Antietam was a good ship. I went through two deployments with her and she always brought me home safe. Thank you sweetheart.

Too bad google translate can't translate for Navy to English :)

Sorry. I get carried away at times. I don't know which things were specific to your questions, but here are some basics:

Hooyah Dan,
Enjoy this transition. It's never easy to leave somewhere that you've known as your second home, but don't let that hold you back. FCCM is right, you had the watch, now turn it over and let someone else get that experience. You were a blessing to that ship and your expertise will be missed, but they have to go on without you. Fair winds and following seas brother.
Reggie

Reggie, I count you among the good men I knew on this ship. Truly you were a blessing to me. Thank you!

You're right anonymous 10:21, the Navy has her own language. Goggle translate should add Navy!

As a member of the Navy family and a Navy family, it is easy to forget. I have vivid recollections of my first day at school. I asked the teacher (Mrs. Thomson) if I could use the head. She thought I wanted to sit closer to her desk, as in the head of the class. Fun times.