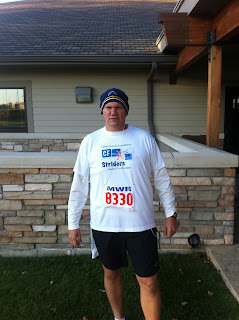 In order to combat my recent slipping on weight, and to enjoy a good run, I signed up for the annual Morale, Welfare, and Recreation (MWR) 10K race, to be held at Willow Glen Golf Course in Great Lakes, IL. I have to confess first that I have never run a cross country race before. I maybe should have because I didn't have a particularly smashing life as a football player and the seasons were at the same time. But what is done is done. So...moving on...

First of all, it was cold when we started! It was 45 when we started, and with the wind it was around 42-43. By the end of the first lap, however I shed the San Diego Chargers cap because I had already heated up too much.

The race was set up around the golf course and because of construction, had to be modified to include an extra half of a mile. This equated to a total of 10.78K. Unfortunately, we weren't told that until after the race. I don't know what my actual 10K result was, but I finished the 10.78K in 59:45. Here is the breakdown for each mile:

I was blown away by the first mile. I had no idea what to expect and it was showing quickly. We were a little bottled up, as in most races, but by the end of mile 1 it was settled out pretty well. Miles 2 and 3 were great! Right around 3.5, I started dealing with side splits. I was in pain until well after mile 4, but it finally settled down. That pain really affected mile 5 because even though it was over, I had expended so much energy running through the pain in the previous two miles that I was pretty much shot. Mile 6, while still exhausted, I was able to refocus and keep running.

I'm much more comfortable on the road than in cross country, so I think in the future I'll stick with the road. However, I'm grateful for the run as it tested me in ways I had not been tested in a long time. It was a tough race but good. The one concern was that we weren't told beforehand that it was going to be an extra half mile. Other than that, it was a great event!

Below is a picture of my running partner and I. His name is Jeff Martin and we have one more race together in November! 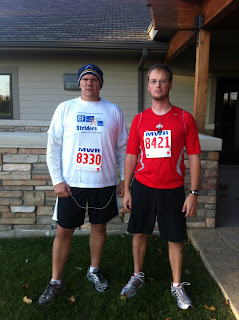 As always, I was wearing my Cystic Fibrosis Foundation shirt. Please consider making a donation to the organization by clicking the above link. Your donation will go a long way to helping find a cure for Samantha's life-threatening disease! Thank you!