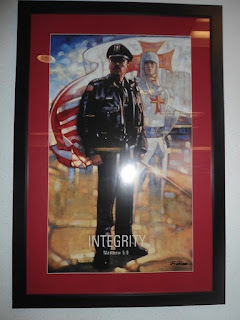 I love Twitter. It gives me a larger viewing spectrum than Facebook does and I have more followers. Makes me feel better about myself. You wouldn't understand. Anyway, I enjoy being on it. Then I saw a fella posting about how everyone is an enemy of America. His handle is @ArmyofGod7. So this guy says that Eric Holder is an enemy of America, All terrorists are enemies of America (Israel, Spain, England, et al, might beg to differ), and the Military Religious Freedom Foundation (MRFF) is an enemy of America. There were several others, but I shorted the arguments for you, my dear readers.

Being intrigued at the MRFF attack, I asked him why he was mad at them. He said that he read an article by Todd Starnes about the Air Force taking down a painting that had a Bible verse on it. Then he said they will be CURSED! Well, since he used capital letters, it must be prophecy.

My first thought on this subject was, “Is this true? Or is someone pulling my leg?” Well, apparently it's true. So, as a Christian in the Navy, I have a few things I want to say about this situation. Here are my thoughts:

1. The Military Religious Freedom Foundation is an interesting piece of work. I can't really figure out what I think of them, but my first impression is not good. I've been to their website and they are very real looking and seem to have many clients. Good for them. As I am not very popular, and my work never lands in the Huffington Post, I will never been a threat to them. However, the fact that they have enough time to argue about a little picture on the wall means they have too much time on their hands. I'm going to investigate this more in the future.

2. The Air Force NCO (non-commissioned officer) who took offense at the painting needs to get over it. We are all, whether Christian or not, subjected to things that are offensive at nearly any given time. We exist to protect our country and our country's interests. They do not include having our feelings protected. You can contact me if you want.

3. Christians who are mad at the Wing Commander who took this down, or mad at the MRFF are wasting time. I've already said we're headed toward a post-chaplain military and we're already living in a post-Christian world. Get on with life shipmates. There is Gospel work to do.

4. @ArmyofGod7 is out of his mind. Seriously, sign up for Twitter, follow @NavyChristian, and then ridicule him. Everyone is an enemy of the State according to him. The worst he'll do to me is call me an enemy of America, and since I've got socks with more sea time than he has, I shouldn't have much trouble proving my patriotism.

5. Finally, the painting is ridiculous. Whoever painted it should be ashamed of himself/herself. What in the world is going on when we have an American flag becoming a European crusader flag? That makes me as angry as someone flying the Confederate Flag. Anyway, the verse used has nothing to do with integrity. Integrity says that we do our job to the best of our abilities, not throwing verses from the Bible around out of context.

The Huffington Post wont, but they should contact me or some other military Christian for our take on the issue. It's not right that they just parade this one around like a stunning victory. I actually like a lot of what the HuffPost does. This though, is silly. However, since I visited their site at least three times while writing this blog post, I would assume that it did what they wanted it to do.

The painting is execrable. It give kitsch a bad name. The most offensive part is the Mt. reference.

"[S]ince I've got socks with more sea time than he has, I shouldn't have much trouble proving my patriotism." Patriotism has been called the last refuge of .... Patriotism is hard to define. What make one unpatriotic?

As far as Holder's status goes, if I had done what he did in Fast and Furious, I would be eating on the taxpayer's dime. Just because someone is a gov't. employee does not make them immune from being an enemy. Who has done more to hurt America than its government? It seems that we are already cursed.

What is the difference between a terrorist and a freedom fighter? It's whose payroll they are on.

Why does the Conf. flag offend you?

I am extremely happy to hear from you, old friend! I have to learn what kind of posts bring you out to talk.

Holder has some dirt against him, but there have been some shady characters in all administrations (regimes?). Whether I think he should be in jail or not is irellevant.

I do think that the government has a good chance of being a danger to its people, but again, not only a liberal government, and besides, I am sworn to accept his orders. I'm not the guy to be making that argument.

The problem with patriotism is that it masks cowardice. It's a lot of bravado but no substance. This fellow I was arguing with is all bravado and no desire to actually protect his country. I have given 17 years to mine. He's given some words on Twitter.

I promise you I will write about the Confederate Flag. Others have asked as well. But not now.

I did not comment on the HuffPost piece. Hundreds had already done so and it would have just gotten me into more arguments.