Want to know how Semplice stacks up against the other "unknown" distros of 2013? Click here to find out!

I've reviewed a few flavors of Linux, from Mint to Manjaro, and I've found something to be critical of in almost every distro. Whether it's gNewSense's adherence to an asinine free software policy or Unity's odd design, I've often found problems with the distros I've reviewed. With that in mind, let me just say that Semplice5 is going to be different.

This distro passed the most important test. Within a few minutes of firing up the live CD version, I put my 7 year old daughter on it and showed her how to get to YouTube. I showed her once (left click on the desktop, right click on web browser, type in youtube into the search bar) and then she needed no further assistance.

Bottom line: I like the distribution very much. It's unfortunately sitting at 82 on the top 100 on Distrowatch's list. It should be way, way higher. Hopefully my review will help it achieve more. 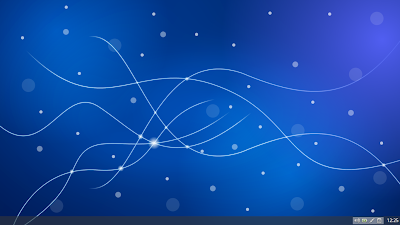 As you can see by the above screenshot, the desktop is extremely clean...as in sparkling. Simplice claims to be a fast, elegant design, and they deliver wonderfully on both accounts. Part of what made my daughter so happy about using it is because it looked “pretty.” I loved how it took a computer that had become bogged down by Windows 7 and sped it up to run nearly as fast as my MacBook Pro. By the way, I have a test system 64 bit Toshiba Satellite C655 with a Celeron 2.3GHZ processor and 3GB RAM, onboard video processor and a 220GB hard drive.

To further test the OS as it relates to my computer, I took my 2 year old Toshiba Satellite and put it through several real-world situations. At rest, the OS used 266MB of RAM and 1% of CPU resources. Not bad! I haven't seen a fully-functioning OS operate at those perimeters since I've started reviewing distros, though I know some exist.

Starting a search via Chrome and Google shot my resource usage up to 92% and memory up to 532MB. Once I loaded a few of the pages, the CPU usage, for the most part, dropped back down to about 77% and then finally to 1%. Part of that issue is that one of the pages I used kept loading fresh ads. This is still obviously a high reading. Memory remained stable at 556MB. Pulling up Tetris, the distro's default game, I discovered a 30% CPU usage and around 340 MB RAM utilization during actual gameplay. 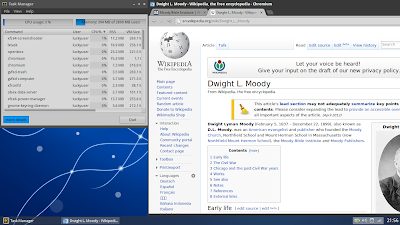 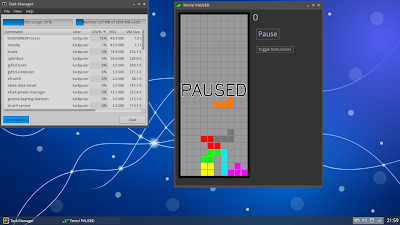 Battery life was pretty good for my older laptop. It's hard to compare it to the Windows 7 primary OS because it runs so painfully slow that testing it is almost impossible. Still, I got 2hr 45min from Simplice5 while running a mix of rest time, YouTube videos, Tetris, and taking screenshots. Overall, I was impressed with the resource utilization.

As usual, there are always things that could have gone better. One of the biggest drawbacks to Semplice5 is the lack of office applications. AbiWord is a fine application, and I'm not against having it available, but it can't compete with LibreOffice. They do "ship" with Gnumeric as well. Again, nothing against it, but it's not a complete suite and definitely not enough to launch a home business with. So you will have to go get an office suite once you install it. 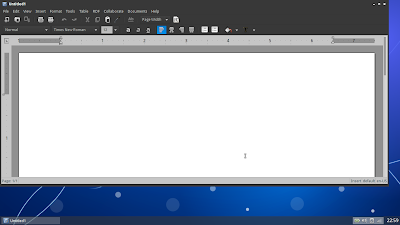 AbiWord is good, but it's not a complete suite.

It also only comes with Tetris. This isn't much of a problem for me though, but if you want to play more, go get more.

Final Thoughts: As I mentioned in the Bottom Line, I think this distro has legs. I am so impressed by it that it has become my main installation for my Toshiba test laptop. It could have a better loadout of programs (namely in the games and office suite), but anyone can fix that upon installation by getting the programs you want.

Try out this distro and let me know what you think. I'm betting that you'll like it as much as I do!